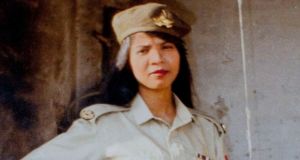 Pakistani Christian Asia Bibi in an undated photo handed out by family in 2010. The supreme court has overturned her blasphemy conviction. Photograph: HO/Reuters

Pakistan’s top court has acquitted a Christian woman who has been on death row since 2010 after she was accused of insulting Islam’s Prophet Muhammad.

Ms Bibi was being held at an undisclosed jail for security reasons.

The landmark ruling is expected to anger Islamists who had threatened to launch nationwide protests if the court freed her.

Ms Bibi was arrested in 2009 after a quarrel with Muslim women.

Islamists have demanded her execution. A governor and a minister of minorities were assassinated in 2011 for supporting her.

Insulting Islam is punishable by death in Pakistan.

Ms Bibi’s case has outraged Christians worldwide and been a source of division within Pakistan, where two politicians who sought to help Ms Bibi were assassinated.

Supporters of Islamist political party Tehreek-e-Labaik (TLP), which was founded to support Pakistan’s harsh blasphemy laws, immediately condemned the ruling and blocked roads in Karachi, the country’s largest city, and in the city of Lahore.

The TLP threatened to paralyse cities if Ms Bibi’s conviction was overturned.

Pakistan chief justice Saqib Nasir, who headed a special three-person bench set up for the appeal, cited the Koran in his ruling, writing “Tolerance is the basic principle of Islam” and noting the religion condemns injustice and oppression.

“It is great news for Pakistan and rest of the world,” Ms Bibi’s lawyer Saiful Mulook told Reuters.

“Asia Bibi has finally been served justice Pakistan’s Supreme Court must be appreciated that it upheld the law of the land and didn’t succumb to any pressure.”

Ms Bibi’s case has been high on the agenda of religious hardliners in Pakistan, many of whom are fiercely opposed to her release.

In November, TLP staged a crippling blockade of the capital, Islamabad, after small changes to a religious oath, which it claims was tantamount to blasphemy. Seven people were killed and more than 200 wounded in clashes with the police and TLP’s supporters only dispersed after striking a deal with the military. – AP/Reuters