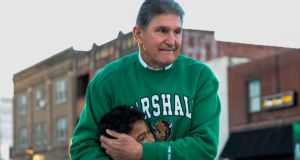 The leaves are beginning to turn in the foothills of the Appalachian mountains.

Here, just west of the Shenandoah River in West Virginia a key battle in next week’s midterm elections is under way.

The Appalachian range, which stretches along the east of the US spanning a dozen states, has a long and unique cultural history. The area was settled by Scots-Irish immigrants in the 19th century, spawning a vibrant folk culture and tradition.

But the area increasingly became synonymous with rural poverty and isolation, a white working-class culture that was being left behind as America’s economy advanced through the 20th century and coal mining began its slow decline.

In the late 1960s the then senator Bobby Kennedy visited the poor, mining towns of Kentucky. His first-hand encounter with the poverty there helped galvanise the sense of social justice that defined his politics in the years before his assassination in 1968.

Fifty years later, Donald Trump won the minds and hearts of the people of the Appalachian region.

The billionaire candidate won the white working-class states like Kentucky, West Virginia and the adjacent rustbelt states of Michigan and Indiana in 2016, cementing the shift from Democrat to Republican in these areas that has been one of the most dramatic changes in the American political landscape in recent times.

Nowhere has the Democratic Party lost more support than in West Virginia. Bill Clinton won the state by 13 percentage points in 1992. In 2016 Trump won it by a whopping 42 percentage points – one of the biggest margins-of-victory in the country. Such is the shift red that the state’s governor, Jim Justice, switched from Democrat to Republican last year, telling constituents that Trump is a “good man” with “real ideas”. “He cares about America. He cares about us in West Virginia.”

Two years after Trump’s victory, West Virginia is once again in the spotlight.

The Senate race between the incumbent senator, Democrat Joe Manchin, and his Republican challenger, state attorney general Patrick Morrisey, promises to be one of the closely-watched races in the country.

Manchin is one of 10 Democrats defending Senate seats in states that Trump won in 2016.

A former governor, Manchin remains one of the few Democrats in powerful political positions in the state. His brand of down-to-earth populism remains a pull in the state, regardless of political affiliation. Six years ago he won his seat with 60 per cent of the vote, even as the Republican presidential candidate Mitt Romney won every county in the state.

Manchin rose to national attention last month when he was the only Democrat to vote in favour of Brett Kavanaugh’s nomination to the supreme court. While for many Democrats it was a sellout of the party’s principles, others saw it as a canny move by a politician in tune with the mood of his constituents.

Manchin may also be helped by the fact that his challenger, Morrisey, has come under fire for his previous work as a lobbyist for pharmaceutical companies, while his wife has also represented big pharma. This has emerged as a big issue in a state at the coalface of the opioid crisis.

Nonetheless, Republicans are confident that the Trump effect gives them a real chance of flipping the Senate seat in West Virginia – a scenario that could be crucial to Republicans maintaining control of the US Senate where they hold a 51-49 majority. Trump, who has visited the state several times since his election, will travel to West Virginia again for a rally on Friday.

In the town of White Sulphur Springs, voters are happy with how Trump has performed since assuming the presidency.

Like virtually all districts in the state, Greenbrier County, where White Sulphur Springs is located, voted for Trump in 2016 by two to one.

Roger Windoy, whose descendants have been living in the area since the late 1700s, says he supports the president. Like many West Virginians he was a lifelong Democrat who voted Republican.

“He has done more in two years than any other president I think,” he says as he stands beside his pick-up truck in the main street. “The Democrats stopped listening to people like me. It’s all about minority interests now.”

As we chat the news has emerged about the 13 suspicious devices sent to senior Democratic figures.

Windoy believes that Democrats may be to blame. “Look at the mob behaviour we saw during the Kavanaugh hearings. It was a disgrace. Democrats bussing people in to different areas for riots. That’s sedition. [House minority leader] Nancy Pelosi should be arrested and tried,” he says, as he starts up his engine and drives off with a wave.

Like many areas of West Virginia, parts of Greenbrier County have seen better days. While ostensibly White Sulphur Springs is a picturesque mountain town, a closer look reveals a shabbier side.

Store after store is closed on the main street. On one side of the road a shop with the sign for guns is doing some trade, while the street is adorned with flags with the faces of “hometown heroes” – fallen members of the military from the area.

Driving around the rural roads further south, signs of poverty are evident with lonely shacks with makeshift scrapyards and the odd American flag punctuating the quiet country roads.

A few miles west is the pretty town of Lewisburg – one of the few Democrat enclaves in this region of the state.

Tucked away on a little side street in the town is the office of a Democratic political group. Under the sign “Blue Skies Ahead” the office is the election headquarters of a political action committee run by the local county’s Democratic women’s club.

Tenley Shewmake, a Democratic activist, explains that the group is focused on a number of elections next week – as well as the Senate race, Democrats are eyeing up gains in the House of Representatives. West Virginia’s three seats in the House in Washington are all held by Republicans.

Like many Democrats – and particularly women voters – here and around the country, there is a quiet confidence that the wave of feeling against Trump may bear fruit on election day. Earlier in the day in Lewisburg, for example, a group of 35 women marched from the office to the local voting booth on the first day of early-voting to cast their ballots for Democrats.

Standing in the office surrounded by Democrat signs and bunting, Shewmake becomes emotional as she discusses Trump. “I sometimes look at my neighbours, my friends and am mystified. How could you vote for him? He is horrible,” she says, tears in her eyes. Although she has always been politically active, she believes that this election matters more than ever.

Driving around the county, other women I speak to express similar views. Many Democrats feel that behind the bombast and newfound confidence of Republicans since the Kavanaugh hearings, female voters, even in Republican regions, are quietly energised.

In terms of the Senate race, polls tell conflicting stories. An October 21st poll showed Manchin storming ahead with a 16 point lead. But a poll commissioned by the National Republican Senatorial Committee days later showed Meehan inching ahead.

What is clear is that, come election night, West Virginia will once again become one of the closely-watched races in the country, as America gives its first real verdict on the divisive presidency of Trump.