Fatal stabbings in England and Wales at highest recorded level 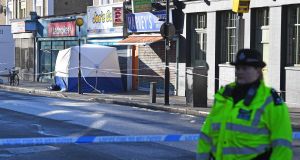 The scene in Islington, north London, where a 17-year-old boy died after being stabbed on January 29th. Photograph: Victoria Jones/PA Wire

Fatal stabbings in England and Wales have reached the highest level since records began more than 70 years ago, official figures show.

The homicide rate also rose by 15 per cent in one year – the highest level in a decade, according to the data from the Crime Survey for England and Wales and crimes recorded by the police.

Between March 2017 and 2018, 285 killings were carried out with a knife or sharp instrument – the highest since Home Office records began in 1946. The rates, recorded by police, marked the fourth consecutive annual rise in homicides following a long-term decline.

The report prompted renewed calls for more police funding after government cuts led to a loss of over 22,000 officers since 2010. Diane Abbott MP, Labour’s shadow home secretary, said the data was “deeply troubling.”.

“This is part of a pattern of rising violent crime, but the government remains in denial on this,” she said. “There are many causes of rising serious crime, but government cuts have worsened them all in every area, from welfare, to schools to mental health treatment. Cuts to police funding are also a factor.”

Homicides – excluding those committed in terrorist attacks in London and Manchester or the recording of events at Hillsborough in 1989 – rose from 606 in the previous year to 695 in the year ending 2018.

In the year to March 2018, 285 homicides were carried out with a knife or sharp instrument in England and Wales. When these exceptions are included, there were 726 homicides in the year ending March 2018, the highest since 2008 when 729 were recorded.

Men were more likely than women to be killed by a friend or acquaintance – 25 per cent compared with 7 per cent of female victims.

Nick Hurd, the minister for policing and the fire service, said: “We are investing a further £220 million [€250 million] in community early intervention projects and have made clear that all public bodies need to treat serious violence as a priority and will be consulting on making it a legal duty.

“We must also provide the police with the necessary powers to tackle violent crime, that is why we have listened to their concerns about rising demand and have proposed the biggest increase in police funding since 2010.”

Last month, a British government announcement of an additional £970 million in police funding for 2019 was criticised.

Trends in domestic abuse also continued, with women far more likely then men to be killed by a partner or ex-partner – 33 per cent of female victims compared with 1 per cent of male victims. A separate report from the UK Office for National Statistics revealed that more than half of all violent incidents were experienced by repeat victims, a trend that was most common among victims of domestic abuse.

Over the past four years, the level of violent crime has remained fairly static, but incidents recorded by police showed an increase in crimes in which a higher level of harm was caused.

The crime survey date showed that more than 60 per cent of violent incidents that occurred in the year did not come to the attention of the police.

Sarah Jones, the Labour MP for Croydon Central and chair of the all-party parliamentary group on knife crime, said: “The public health emergency of knife crime continues unabated, and it is our young people dying in the greatest numbers.

“The government cannot keep acting like police numbers have no role to play in tackling this. The language has started to shift from ministers, recognising we must treat this as a public health issue and intervene early. But that cannot be seen as a replacement for a rapidly depleting police force.” – Guardian