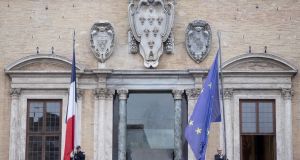 French policemen hold up French and EU flags on the facade of Farnese Palace, the French embassy in Rome. File photograph: Claudio Peri/EPA 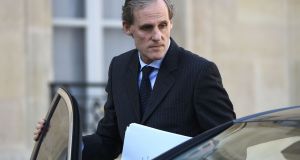 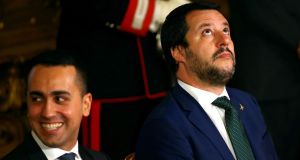 France recalled its ambassador to Rome on Thursday, for the first time since Italy declared war on France in 1940. The move signifies a serious rupture, unprecedented in postwar relations between European powers and only a step short of breaking diplomatic ties.

Agnès Von Der Mühll, the spokeswoman for the French foreign ministry, announced the recall of ambassador Christian Masset in a short statement.

“France has for several months been the object of repeated accusations, of baseless attacks, of outrageous declarations that everyone knows and bears in mind,” Ms Von Der Muhll said. In a remark so vulgar that it was little reported in France, the Italian undersecretary for foreign affairs, Manlio Di Stefano, recently said French president Emmanuel Macron “suffers from the syndrome of the small penis”.

Mr Di Stefano is part of the populist Five Star Movement (M5S) whose leader, Luigi Di Maio, is a deputy prime minister and minister for labour.

Matteo Salvini, the head of the far right League, interior minister and the strongman in the Italian government, said recently that he felt sorry for “millions of men and women in France who live with a very bad government and a very bad president of the republic”.

Mr Salvini attempted to ease tensions after the ambassador’s recall on Thursday. He told the Corriere della Sera: “I am ready to turn the page in our relations with France, for the good of our people and I would be happy to meet Macron. But France must stop turning back migrants at the border.”

On Tuesday, Mr Di Maio met representatives of the rebellious “yellow vests” movement in the French town of Montargis. He had urged them to “hang in there” last month.

Mr Di Maio called the photograph “a souvenir of a beautiful meeting, the first of a series, during which we talked about our countries, social rights, the environment and direct democracy”.

Christophe Chalençon, a gilet jaune leader who met Mr Di Maio, and who is launching a list for the May 26th European election, said he wanted “to clarify the relations between M5S and the League” because it was “out of the question for us to draw closer to the extreme right”. Mr Chalençon was satisfied that M5S was “a popular, centre left-wing movement”.

Mr Salvini and Mr Di Maio both seek potential allies in the EU parliament. It was inadmissible that discord between the two countries “be exploited for electoral reasons”, the French foreign ministry said. Alluding to Mr Di Maio’s trip to Montargis, it added: “The most recent interference constitutes an additional and unacceptable provocation. It violates the respect that is due to democratic choices, made by a friendly, allied country. It violates the respect that democratically and freely elected governments owe to each other. The European election campaign cannot justify the absence of respect for other peoples or their democracy. ”

The situation has worsened dramatically since Mr Salvini and Mr Di Maio came to power last June, but the deterioration in Franco-Italian relations started eight years ago, with the French intervention in Libya, and was aggravated by France’s response to migrants landing on Italian beaches.