War criminals in Guatemala to be freed if amnesty law passed 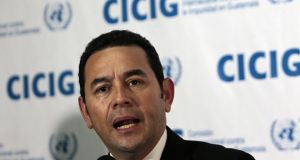 The country’s parliament is set to vote to reform the national reconciliation law and give absolute impunity for crimes against humanity including genocide, rape and forced disappearance. The law currently exempts only political crimes and has been regarded as a beacon for postwar justice since coming into force alongside the 1996 peace accords.

The new initiative is backed by former army generals angered by a wave of prosecutions that has resulted in the convictions of at least 33 military officers and militia members since 2008. One former guerrilla leader has also been convicted of human rights abuses.

If approved, all the convicts, and those held on remand awaiting trial would be free within 24 hours; pending trials would be cancelled and ongoing investigations shelved.

Michelle Bachelet, the UN human rights commissioner, condemned the move as a “drastic step backwards for the rule of law and victims’ rights”.

The vote takes place as the beleaguered president, Jimmy Morales, backed by a powerful network of military and economic elites, continues efforts to oust the UN-backed anti-impunity group Cicig and sabotage the constitutional court.

The timing is no coincidence, said Jo-Marie Burt, a political science professor at George Mason University and senior fellow at the Washington Office on Latin America (Wola).

“This push is part of a broader effort by a coalition of military, business and political interests not just to stop Cicig, but to end all investigations into organised crime, human rights violations and corruption in order to reassert their total dominance in Guatemalan politics and society.”

Cicig does not investigate historical crimes but has helped weed out corruption from the courts and attorney general’s office, which are also now under attack.

Supporters of an amnesty argue that prosecutors have unfairly targeted security forces over leftist guerillas. But 93 per cent of human rights abuses were committed by US-backed government forces, compared with 3 per cent by guerrilla groups, according to the postwar Commission for Historical Clarification.

The felons who would benefit from the amnesty include top-ranking generals from the bloodiest period of the counterinsurgency war when rural indigenous communities and urban social activists were mercilessly persecuted.

Among them are Benedicto Lucas Garcia, the former head of the armed forces, and Manuel Callejas y Callejas, the former intelligence chief, who are serving 58 years for crimes against humanity, as well as the forced disappearance in 1981 of 14-year-old Marco Antonio Molina Theissen and aggravated sexual assault against his older sister Emma Guadalupe.

“The total amnesty violates our right, and that of the Guatemalan people, to justice and the truth. It would thwart the hopes of victims to have a little peace in our souls,” said their sister, Lucrecia Molina Theissen.

Gen Garcia is also accused of crimes against humanity at the Creompaz military base where 550 bodies were exhumed from mass graves. This case involving eight senior officers would be abandoned.

Any hope of justice for the other 5,000 children disappeared during the war would be crushed by the amnesty. It would also quash the sentences handed down in a landmark 2016 ruling against two officers convicted for sexually enslaving 15 Mayan Q’eqchi’ women in the Sepur Zarco village after their campesino husbands were disappeared.

Callejas, the convicted former intelligence chief, is the alleged founder of the organised crime network known as the Brotherhood, which infiltrated public institutions including border control and customs for financial gain.

It was a customs scandal that in 2015 brought down the government – and alleged criminal empire – of the former army general Otto Perez Molina.

The bill, which is sponsored by a dozen members of congress, claims a total amnesty is necessary to achieve “true peace and reconciliation”. It must win three votes by a simple majority, before passing to the executive.

The proposed reform would also enable legal action against human rights activists considered a threat to public law and order, which campaigners fear could lead to reprisals against those who testified in high-profile cases. – Guardian