Trump says US may declare Isis defeated next week 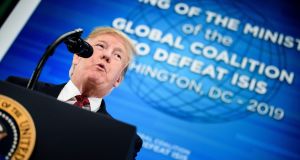 US president Donald Trump speaks to the Ministers of the Global Coalition to Defeat Isis at the US state department in Washington on Wednesday. Photograph: Brendan Smialowski/AFP/Getty Images

US president Donald Trump has said he expected a formal announcement as early as next week that the coalition fighting Islamic State militants has reclaimed all of the territory previously held by the extremist group.

“Their land is gone. It’s a big factor – their land is gone,” Mr Trump told foreign ministers and other senior officials from 79 countries that have worked alongside the United States in fighting the militant group in Syria and Iraq.

Mr Trump’s decision to withdraw US forces from Syria has prompted some criticism at home from Republican and Democratic lawmakers, who fear Islamic State, also known as Isis, could regain its strength.

A top US army general for the region, Joseph Votel, said in Senate testimony on Tuesday that the group could experience a resurgence after a US pullout.

Mr Trump did not back down from his determination to withdraw, saying, “We look forward to giving our brave warriors in Syria a warm welcome home.”

“The United States military, our coalition partners and the Syrian Democratic Forces have liberated virtually all of the territory previously held by Isis in Syria and Iraq,” Trump told the gathering at the state department.

He said the achievement “should be formally announced, sometime, probably next week, that we will have 100 per cent of the caliphate”.

Earlier, US secretary of state Mike Pompeo reassured the coalition partners that the withdrawal of US troops from Syria was not “the end of America’s fight” and called on them to help permanently defeat Islamic State in Syria and Iraq.

“The US troops withdrawing from Syria is not the end of America’s fight. The fight is one we will continue to wage alongside you,” Mr Pompeo said. “The drawdown in troops is essentially a tactical change, it is not a change in the mission. It simply represents a new stage in an old fight.”

Warnings by Mr Pompeo and others that Islamic State remained a dangerous threat fly in the face of Mr Trump’s December declaration that the militants had been defeated and the United States would withdraw its roughly 2,000 US troops from Syria.

The president’s sudden decision shocked coalition partners, including an alliance of Kurdish and Arab militias that has been among the most effective against Islamic State, and prompted the abrupt resignation of defence secretary Jim Mattis.

Mr Pompeo said despite progress in fighting Islamic State in Iraq, the group retained a strong presence in that country and was trying to mount a clandestine insurgency.

“The coalition must continue to support the government of Iraq in its efforts to secure the liberated areas of that country,” Mr Pompeo said. “Mr Foreign Minister, we’re with you,” he told Mr Hakim.

Earlier this week, Mr Trump said it was important to keep a US military presence in Iraq so that Washington could keep a close eye on Iran, according to a CBS interview aired on Sunday.

However, Iraqi president Barham Salih said on Monday that Mr Trump did not ask Iraq’s permission for US troops stationed there to “watch Iran”. The United States and Iran are Iraq’s two biggest allies.

On Wednesday, Mr Hakim, apparently responding to Mr Trump’s comment, called on countries to show full “respect for the territorial integrity of Iraq and for all operations to take place with the knowledge of Iraq, and in consultations with Iraqi security forces”. – Reuters