Elizabeth Warren struggles to quieten criticism of her heritage claims 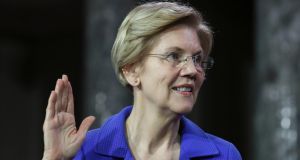 US senator Elizabeth Warren is due to formally launch her campaign for the Democratic presidential nomination to run against Donald Trump in 2020. Photograph: Alex Edelman/AFP/Getty Images

US senator Elizabeth Warren, days from formally launching her 2020 presidential campaign, has faced criticism for claiming she was Native American in the 1980s and concern from fellow Democrats over her handling of the issue.

The Washington Post reported on Tuesday that the Massachusetts Democrat described herself as Native American in a form to join the Texas legal bar in the 1980s, the latest twist in the six-year saga during which she has been unable to quieten critics who say she failed to recognise the importance of tribal sovereignty.

Fellow 2020 Democratic presidential hopefuls remained silent, while others in the party worried the controversy could cause her campaign to falter even before she formally launches it on Saturday.

“They mishandled it from the minute that she was presented with evidence that she isn’t Native American,” said Scott Ferson, a Democratic strategist in Boston.

This week’s news about Ms Warren comes as Democrats grapple with accusations of racial insensitivity.

It was discovered that the Democratic governor of Virginia Ralph Northam posed for his medical school yearbook in blackface in the 1980s, and attorney general of Virginia Mark Herring admitted to wearing “brown make-up” to a party, also in the 1980s.

One Warren financial backer, who asked to speak anonymously, said those revelations complicated Ms Warren’s political viability but should not doom her.

“I think her policies are strong enough. Her honesty or her devotion to making things better – that overcomes any issues, any doubts that this might raise in my mind about her,” the donor said.

Ms Warren told reporters in Washington on Wednesday she did not believe her identification as Native American ever helped her to get ahead.

She said her recent apologies were a recognition that she should have been more aware of how she was identifying.

“I’m not a tribal citizen, and I should have been more mindful,” Ms Warren said.

Her campaign did not respond to requests for comment.

Ronna McDaniel, chairwoman of the Republican Party, asked the Texas bar association to discipline Ms Warren for presenting herself as Native American, which she said was a false statement.

Senator Kamala Harris, who also is seeking the Democratic nomination to challenge president Donald Trump, told the Washington Post the debate was a “distraction”.

Ms Warren’s heritage claims have dogged her since her first campaign for the US Senate in 2012, when Republican Scott Brown attacked her for being listed by Harvard University as a minority when she was a member of the faculty.

After Ms Warren criticised Mr Trump ahead of his 2016 campaign, he nicknamed her “Pocahontas”, despite criticism he was being racially insensitive.

Last year, after Mr Trump offered to pay her $1 million if she took a DNA test, Ms Warren released results of an examination of her genetics. That angered tribal leaders who said being a Native American is not determined by DNA alone but by membership of a tribe. – Reuters