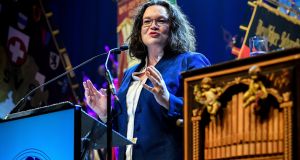 Germany’s centre-left Social Democratic Party (SPD) plans to halt its dramatic slide into political oblivion with a radical reworking of welfare reforms that started its slide in 2005.

Ex-SPD chancellor Gerhard Schröder introduced the so-called “Agenda 2010” reforms 14 years ago, which were credited with turning around the German economy.

But many SPD voters abandoned the party in protest at what they viewed as draconian measures betraying the working class.

One contested measure gives jobless Germans just one year of dole payments at two-thirds of their final salary, before sliding down to the welfare minimum of €424 monthly.

Another rule requires welfare recipients to move to a smaller home if their existing accommodation exceeds strict limits for rent allowance.

Among new proposals: allow jobseekers over 58 double the duration of dole payments – or longer depending on circumstances; and greater flexibility on living space.

“Those affected need their energy to find a new job, not a new apartment,” said Ms Nahles, promising to abolish job centre sanctions if they “make no sense . . . beyond causing new problems”.

Anticipating criticism from her Christian Democratic Union (CDU) coalition partner, Ms Nahles insisted that welfare payment levels should remained unchanged, “out of responsibility for those who work every day”.

Within hours, the CDU were on the case, rubbishing the SPD plans as “irresponsible”.

But SPD leaders are carrying on regardless, pushing a new pension floor of €961 a month for everyone who has worked more than 35 years.

As their proposals are not part of the programme for government, they are more promotional material for looming elections – or bargaining chips when a grand coalition review clause kicks in later this year.

Gripped by an existential crisis on just 14 per cent in opinion polls – down six points on its disastrous 2017 election result – Germany’s oldest political party has little left to lose.

Trump claims US is under siege from ‘far-left fascism’ in Fourth of July event 07:42
Coronavirus cases in US continue to surge ahead of Fourth of July 20:25
England lifts quarantine for 59 countries but plan criticised as ‘shambolic’ 19:32
Civil servant appointed as French PM after Philippe stands down 19:13
Spanish councillor offers to resign after showering during video meeting 18:43