Theresa May says her commitment to avoiding hard border ‘unshakeable’ 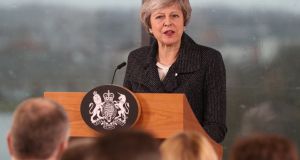 British prime minister Theresa May has signalled her intention to push the European Union to agree to a time limit being placed on the backstop designed to avoid a hard border.

Speaking to Northern Ireland business leaders in Belfast on Tuesday, Mrs May said her commitment to avoiding a hard border was “unshakeable”.

But she said the backstop as currently worded could not win the support of the House of Commons.

On the first day of her two-day visit to the North, Ms May referred to how the House of Commons last week adopted an amendment from Conservative MP Sir Graham Brady, which she endorsed, that required the backstop to be replaced by “alternative arrangements”.

That amendment, she said in her Belfast speech, “would mean replacing the backstop with another arrangement which avoids a hard border or making legally binding changes to the backstop to introduce a time limit or create an exit mechanism”.

Downing Street sources said the “indefinite nature” of the backstop was one of the major obstacles to resolving the impasse.

Mrs May is to travel to Brussels on Thursday where the sources indicated that she would emphasise how the absence of a time limit to the backstop was one of the key reasons no agreement has been possible.

And while Taoiseach Leo Varadkar and European Union leaders have insisted there is no proposed workable alternative to the backstop, the Downing Street sources referred to how German chancellor Angela Merkel had spoken of the need for “creative solutions”.

“There is a sense that [THE EU]wants to see a deal done,” said one senior source. “Detailed work is being done at pace on alternative arrangements,” added the source.

Mrs May is to hold one-to-one meetings with leaders of the North’s five main parties at Stormont on Wednesday. And while the DUP, which is propping up Mrs May’s government, has indicated it could reluctantly accept a time-limited backstop, Sinn Féin and the SDLP were insistent on Tuesday night that the current backstop must remain in place.

After listening to Mrs May’s speech, the Sinn Féin deputy leader Michelle O’Neill accused the British prime minister of making a “dangerous political U-turn on the agreed backstop” and of engaging in a “huge act of bad faith”.

SDLP leader Colum Eastwood said he would be delivering a very simple and succinct message to Ms May: “Deliver on the backstop”.

DUP MP for South Belfast Emma Little-Pengelly, however, welcomed Mrs May’s commitment “that she is returning to Brussels to seek change which can address our objections to the draft withdrawal agreement”.

During a question and answer session with journalists after her speech, Mrs May was reminded how business leaders in Northern Ireland at her encouragement took risks to support her withdrawal agreement which contained the original backstop.

Asked if she had made a U-turn she indicated that some form of modified backstop would be required. “There is no suggestion that we are not going to ensure that in the future there is provision for this - it’s been called an insurance policy, the backstop - that ensures that if the future relationship is not in place by the end of the implementation period, there will be arrangements in place to ensure that we deliver no hard border.”

“We have been very clear there will be an insurance policy. We are absolutely committed to there being no hard border between Northern Ireland and Ireland.”

Mrs May made no reference to the strains between Dublin and London created by Brexit. She said she wanted “to work closely with the Taoiseach Leo Varadkar and the Irish Government, as so many of our predecessors have before, to strengthen the bilateral relationship we have built”.

She also said that British home secretary Sajid Javid would carry out a review of issues surrounding difficulties faced by residents of Irish nationality in bringing family members into Northern Ireland.