Varadkar to hold talks with May in Dublin on Friday

We will not gamble on peace or put a sell-by date on reconciliation says, Tusk 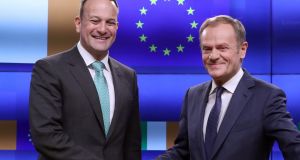 Those who promoted the idea of Brexit without any sense of what was to come next face “a place in hell”, the president of the European Council Donald Tusk said on Wednesday.

“I’ve been wondering what that place in hell looks like for those who promoted Brexit without even a sketch of a plan for how to carry it out safely,” he said after a meeting with Taoiseach Leo Varadkar ahead of Thursday’s visit to Brussels by the British prime minister Theresa May.

At a later press conference with European Commission President Jean Claude Juncker, Mr Varadkar said he will meet Mrs May for talks in Dublin on Friday.

The common message of the meetings in Brussels - from Mr Tusk, the European Parliament’s leadership and later Mr Juncker - was firm, unambiguous, and uncompromising.

Above all, it was reassuring to a Taoiseach who has been told repeatedly by the British press that Ireland is now facing pressure to give on the backstop.

The EU remains resolute on its Withdrawal Agreement and, as the Taoiseach put it, determined to do right by Ireland.

Mr Varadkar warned that the European Parliament also had to ratify any agreement and had made clear t it would not pass any deal that saw backsliding on Ireland.

“We will not gamble on peace or put a sell-by date on reconciliation. And this is why we insist on the backstop,” Mr Tusk said, alluding clearly to British demands for a backstop exit mechanism. “The EU 27 will not be making any new offer.”

He, Mr Juncker and Mr Varadkar vigorously insisted that the Withdrawal Agreement can not be touched but that there remains room for discussion on the joint political declaration if the UK changes its approach to the long-term relationship.

“Ireland will not be left alone” Mr Juncker said at a press confrence with Mr Varadkar after they held talks.

I've been wondering what that special place in hell looks like, for those who promoted #Brexit, without even a sketch of a plan how to carry it out safely.

He said the backstop is needed for “obvious, vital” reasons.

Mr Juncker said the EU “could not accept the idea which has been circulated around that the Withdrawal Agreement could be reopened”.

The Taoiseach expressed skepticism about the House of Commons’ resolution committing the prime minister to promote “alternative arrangements” to the backstop. It had probably been passed, he said, because the phrase “can mean whatever you want it to mean.”

Much of the discussion between the Taoiseach and Mr Juncker is understood to have focused on no-deal preparations in Ireland, an eventuality that appears here by the day to loom larger.

Mr Varadkar did not elaborate on what measures would have to be taken on the Border, beyond acknowledging an Irish obligation to protect the single market and an insistence that the Government is not making any preparations.

He paid tribute to the continued solidarity of the 27. “As a leader of a small country that is fully committed to the EU, this solidarity resonates deeply in Ireland, but not just in Ireland, in all small member states,” he said.

Mr Varadkar said of the continued necessity for the backstop “I think the events in London and the recent instability demonstrate exactly why we need a legal guarantee.”

Mr Tusk insisted he still believed a compromise is possible: “I hope that tomorrow we will hear from Prime Minister May a realistic suggestions on how to end the impasse ....

“The top priority for us remains the issue of the border on the island of Ireland and the guarantee to maintain the peace process and the Good Friday Agreement.”

Mr Tusk said that with British departure only 50 days away “I know that there are still a great number of people in the UK and on the continent and in Ireland wish for a reversal of this decision. I have always been of that view with all my heart but the facts are unmistakeable .

“At the moment the pro-Brexit stance of the UK prime minister and of and the leader of the opposition rules out this question. Today there is no political force and no effective leadership for remain. ... you can’t argue with the facts.

“Today our most important task is to prevent a no-deal scenario.”

At the end of the press conference as Mr Tusk and Mr Varadkar shook hands, microphones picked up the Taoiseach telling Mr Tusk: “They will give you terrible trouble in the British press for this.”

“It is Tusk and his arrogant EU negotiators who have fanned the flames of fear in an attempt to try and overturn the result of the referendum,” he said.