Nigel Farage has told Boris Johnson to drop the Brexit deal and join his party in a "Leave alliance" or face a challenge from the Brexit Party in the forthcoming general election. 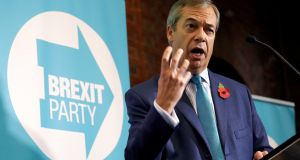 Brexit Party leader Nigel Farage at the party’s election campaign launch in London on Friday. “We will contest every seat in England, Scotland and Wales. Don’t doubt that we are ready.” Photograph: Peter Nicholls/Reuters

Nigel Farage has launched his general election campaign by saying his Brexit party will contest every seat in the country unless Boris Johnson agrees to drop his deal with the EU and sign up to a “leave alliance”.

The former Ukip leader also praised Donald Trump for his intervention in which he suggested the prime minister and the Brexit party should form an alliance.

“Simply, it is not Brexit. What we’re doing here is kicking the can down the road.”

The party is advocating a no-deal Brexit, which it brands as “clean”, so it can leave the EU on World Trade Organisationterms and secure free trade deals around the world. It is also pushing for voting reform, the abolition of the House of Lords in favour of an elected second chamber, and the creation of written constitution.

Mr Farange criticised the “broken promises” of all politicians and reserved some of his most stinging criticism for Jeremy Corbyn’s party, in a sign his own party will be targeting Labour seats.

He said the Brexit party would focus on northeast England, the Midlands, Wales and east London, and had the potential to run in 650 seats if Mr Johnson did not enter a leave alliance. He said his party had until November 14th to come to an agreement with Johnson on seat numbers.

He estimated there were 150 constituencies where his party could appeal to voters and the Tories would not be able to for historic and cultural reasons.

After winning 28 seats at the European parliament elections, the party hopes to replicate its success, primarily in Labour heartlands with policies it says will boost manufacturing jobs.

Mr Farage was joined on stage by the former communist Claire Fox, now a Brexit party MEP, and the former long-standing Tory Ann Widdecombe, who also sits in the European parliament for the party.

The Brexit party chairman, Richard Tice, spoke first at the event, listing the party’s five areas of reform beyond Brexit, including abolishing the House of Lords and the potential for a written constitution.

He said the party would invest £100bn (€116bn) in the regions “left behind” and this would be paid for by scrapping the HS2 rail project. It would also introduce zero business rates for small businesses to “bring life back into our high streets”.

Mr Tice hit out at those who changed political parties, in reference to the raft of defections from Labour and the Tories, to Change UK and to the Liberal Democrats.

Ms Widdecombe said the UK now had “rotten politics” and standards needed to be re-established in parliament.

On her defection from the Conservative party, she said: “I have lost any confidence I may ever have had that here was a party striving for the public good.”

Ms Fox, who represents the North West, said the “tragedy of Brexit” was that despite there having been a public vote for change, it had been overtaken by a technocratic parliament.

She described the Tories’ targeting of “Workington man” - a non-university-educated man, aged over 45, who voted leave - as their key demographic as insulting.

After a lack of investment in the north, she claimed, the idea they could “rock up to northern heartlands” and proclaim themselves the real party of Brexit with “trinkets” of policies is deeply cynical.–Guardian

China pulls back troops locked in standoff with Indian army since May 17:59
Brazil’s president Jair Bolsonaro tests positive for Covid-19 17:16
The music from the temple was ‘Lebanon does not want to die’ 16:26
HIV patient in remission offers hope to millions living with virus 16:15
Ex-Kasabian singer Tom Meighan avoids jail for assaulting former fiancee 15:29