More than 35,000 are trapped on Greek islands with vast majority stuck in asylum limbo 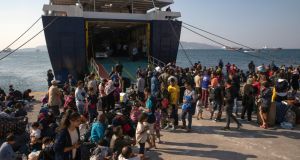 Refugees and migrants who just arrive at the port of Elefsina, near Athens, wait to board buses last Teusday. Photograph: Petros Giannakouris/AP Photo

Greece has passed a controversial asylum law aimed at curbing the rising number of migrants arriving on its shores, despite mounting criticism it will roll back fundamental human rights.

The 237-page Bill, entitled “international protection and other provisions”, has provoked the ire of human rights groups, aid organisations and opposition parties, who claim the law will severely curtail access to safeguards for asylum seekers.

They raised objections that the centre-right government voted into power in July had allowed only days to examine proposals that ordinarily would require months to consider.

Outrage over the legislation, which passed late on Thursday, intensified as a senior European envoy warned that conditions in vastly overcrowded Aegean island facilities had become “explosive”.

“The situation of migrants, including asylum seekers, in the Greek island camps has dramatically worsened over the past 12 months,” said Dunja Mijatovi, Europe’s commissioner for human rights, after visiting Lesbos and Samos, the islands most affected by the influx from Turkey. “Urgent measures are needed to address the desperate conditions in which thousands of human beings are living.”

More than 35,000 men, women and children are trapped on Greek islands facing the Turkish coast, with the vast majority stuck in asylum limbo.

Greece is in the midst of the sharpest increase in refugee arrivals since 2015, when more than a million people, mostly from Syria, crossed over from Turkey into Europe via the Aegean isles.

The abrupt increase has turned into an unforeseen crisis for the administration of the prime minister, Kyriakos Mitsotakis. The three-month-old government, acutely aware of the pressure the surge has placed on local communities, has responded by vowing to take a much stricter stance than its leftwing predecessor.

Last month it pledged to deport 10,000 migrants by the end of 2020. Under a landmark accord reached between the EU and Ankara in March 2016, asylum seekers whose requests were rejected were told they would be sent back to Turkey.

Introducing the legislation in parliament on Thursday, the country’s civil protection minister, Michalis Chrysohoidis, insisted its aim was to accelerate procedures so that refugees could be integrated more smoothly into Greek society and returns of illegal migrants expedited. By streamlining unwieldy asylum processes both could be facilitated, he argued.

“Time is not on our side,” said the minister, explaining that under the new law asylum requests would be handled within 60 days. “Boats are coming from across the Aegean. And with each passing day ever more come.”

Faced with a backlog of 68,000 asylum requests, the system was so strained that claimants were being forced to wait five to six years without receiving any judgment at all, he said.

Mitsotakis told parliament before the vote that the bill was also meant to send a clear message: “Enough is enough, enough with those people who know that they are not entitled to asylum and yet they attempt to cross into and stay in our country,” he said.

The new government has also promised to decongest the islands by transporting up to 20,000 people to the mainland over the next year. But it also says the problem has been exacerbated by the arrival of thousands of economic migrants who do not fulfil the criteria of asylum seekers. The assertion elicited fierce rebuke from the main opposition Syriza party.

“This is a government that is trying to turn the issue into one of [ILLEGAL]migration when the vast majority of incomers come from war zones,” said Giorgos Psychogios, a Syriza MP, in parliament. “It’s the wrong attitude and it is weakening the country internationally.”

Human rights defenders fear the law will make it easier for authorities to detain asylum seekers, narrow their right to work and restrict access to international protection for vulnerable people, including unaccompanied children.

“The new Bill is a naked attempt to block access to protection and increase deportations in the face of the recent increase in arrivals,” said Eva Cosse, Greece researcher at Human Rights Watch.

“The Greek government should instead prioritise resolving the humanitarian crisis that the deeply flawed deal with Turkey has caused for asylum seekers,” she added, claiming the law would make it harder for torture victims to be recognised as such.

Even worse, the legislation had failed to address the medical needs of thousands of refugees and migrants, reducing their already limited chances of accessing specialised care, the aid organisation Medecins Sans Fronti?res said.

This month the United Nations refugee agency also expressed concern about the Greek proposals to overhaul laws affecting asylum seekers, saying they could weaken the protection of refugees.

Increasingly, opponents say the new regulations will make procedures even more convoluted, exacerbating a logjam likely to get worse if, as looks likely, the uptick continues.

“This law is going to aggravate the system,” said Lefteris Papagiannakis, the former vice-mayor of Athens in charge of migrant and refugee affairs. “We’re going to see a lot more people without documents and a lot more obstacles to access asylum. And that will mean added pressure on services already at breaking point.”–Guardian