The Irish Times view on elections in Northern Ireland: a crucial test 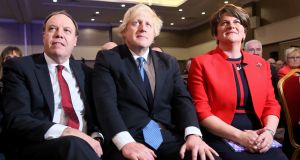 The outcome of the Westminster election in Northern Ireland will show whether the deep divisions in the region over Brexit can trump tribal politics. There were indications in the European and local elections last May that the hegemony of the Democratic Unionist Party (DUP) and Sinn Féin was beginning to crumble at the edges. The straight vote winner-takes-all electoral system for elections to the House of Commons will make it difficult for the smaller parties to challenge the big two, but there are a number of constituencies where the outcome is in the balance.

After its disastrous miscalculations on Brexit, the DUP will have some explaining to do to persuade its supporters that it has a serious contribution to make. It will be helped as usual by the fear so many unionists have of Sinn Féin. That party’s campaign for an early Border poll is as wrong-headed as the DUP’s rejection of a sensible Brexit deal, but the two parties have in the past benefited from a mutually reinforcing attachment to hardline policies.

The signs are that there is a possibility of change in eight of the 18 constituencies. One of the things to watch will be whether the Alliance Party can build on the momentum achieved in May and win a seat or even two in the Commons. The share of the vote obtained by the party will show if speculation about a growing centre ground in Northern Ireland is real.

The Ulster Unionist Party is taking a much more committed pro-EU position under its leader-designate, Steve Aiken, and that will give the unionist electorate a clear and welcome choice between it and the DUP on the major issue of the day. Before the election was called, Aiken ruled out any pacts with the DUP, and if he holds to that position the seat held by DUP deputy leader Nigel Dodds in North Belfast could be under threat.

The DUP’s perverse logic in supporting the hardest possible Brexit, with its implications for the restoration of a Border in Ireland, has been matched by Sinn Féin’s commitment to the long-outdated policy of abstentionism. That has resulted in the party’s seven MPs forfeiting the opportunity to use their pivotal position in Westminster. The SDLP will seek to capitalise on the frustration of many nationalists with the failure of Sinn Féin to represent their interests on Brexit.

The SDLP, which has resolutely refused to go along with Sinn Féin posturing on a Border poll, will make a determined effort to recapture the Foyle constituency, with party leader Colum Eastwood attempting to win back the seat held by previous party leaders Mark Durkan and John Hume. Another SDLP candidate, Claire Hanna, has a chance of a seat in South Belfast, depending on how the vote splits. One way or another, the outcome will tell a lot about where politics in the North now stands.

1 Are we really facing the death of the office?
2 10 upgrades that will add value to your home and 5 that probably won’t
3 Gardaí cannot prosecute people who breach midlands movement restrictions
4 New Zealand marks 100 days without a case of coronavirus
5 German nudist chases wild boar that stole laptop at Berlin lake
Real news has value SUBSCRIBE