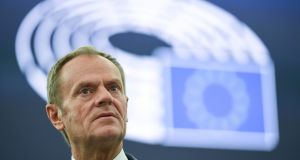 EU ambassadors have agreed to accept the UK’s request for a Brexit “flextension” until January 31st 2020, European Council president Donald Tusk has said.

Just three days before the United Kingdom was due to leave the EU on October 31st at 11pm, the bloc agreed to delay the deadline by three months or until the UK parliament ratify the deal.

Mr Johnson, who won the top job by pledging – “do or die” – to deliver Brexit on October 31st, was forced by opponents to request a delay after he was defeated in parliament over the sequencing of the ratification of his divorce deal.

Formally speaking, the ambassadors set in train the “written procedure” for approval of decisions by leaders in the absence of a a full summit. That will happen after the UK signals its acceptance of the extension, likely to be through its ambassador to the EU, and is expected to be completed without difficulty within 24 hours.

The UK had previously been granted an extension to Friday, and is required under the terms of its Benn Act to accept the EU’s offer of extension to January 31st unless the Commons votes it down.

The agreed delay comes ahead of crucial votes in the UK Commons on Monday on proposals from the government and opposition Liberal Democrats to call a general election in December. Labour, whose vote would be crucial to the government motion, has been waiting until the EU spelled out the precise duration of any extension.

The EU27 has agreed that it will accept the UK's request for a #Brexit flextension until 31 January 2020. The decision is expected to be formalised through a written procedure.

But reports from London suggest that the government may circumvent the need for a two-thirds majority on its motion by backing a Liberal Democrat amendment to the Fixed Term Parliament Act setting December 9th as a date for the election.

That would require only a simple majority. If it does, Labour’s position becomes moot.

However, the general election would take place before any vote on the withdrawal bill, raising the prospect that a new government could seek to renegotiate it.

Although Mr Johnson would prefer to fight an election having secured Brexit, the Tories remain well ahead in the polls

Brexit has already been delayed twice – from March 29th and April 12th – after Mr Johnson’s predecessor, Theresa May, failed to get her deal through the British parliament.

The Government welcomed the decision of the EU27 countries to grant another Brexit extension to the UK.

“This averts the risk of a disruptive no deal Brexit,” said a Government spokesman. “The decision extends the deadline to the end of January but allows for an earlier exit by the UK if ratification is completed quickly.

“We hope the extra time will be used to ensure that the withdrawal agreement between the UK and EU27 is ratified, enabling an orderly Brexit.”

“It prolongs the uncertainty, but it’s better than a crash out,” she tweeted.

She said that “we have no idea” when a British general election will take place “or what it will throw up,” but warned that the next end of January deadline “won’t be long coming around.”

Sources close to the Elysee confirmed over the weekend that France’s president Emmanuel Macron had accepted that the increased likelihood of an election in the UK had made his opposition to a three month extension less tenable. But ambassadors today insisted once again that the terms of the Withdrawal Agreement negotiated with prime minister Boris Johnson are non-negotiable – Additional reporting from Reuters