Killing of Isis leader claimed as major victory by Trump 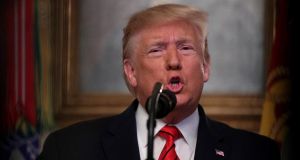 US president Donald Trump declared a major military victory for the United States as he confirmed that the founder and leader of Islamic State had been killed in a targeted raid on Saturday.

Abu Bakr al-Baghdadi died after US troops closed in on a compound in northwestern Syria, prompting the elusive leader to detonate a suicide vest, killing himself and three children.

“It was him,” Mr Trump said in a press conference in the White House. “He was a sick and depraved man, and now he’s gone. Baghdadi was vicious and violent, and he died in a vicious and violent way – as a coward, running and crying.”

Mr Trump, who watched the operation unfold in the situation room along with vice-president Mike Pence and senior administration officials, said that eight helicopters and elite US special forces were involved in the mission that had been planned for several weeks.

“Baghdadi’s demise demonstrates America’s’ relentless pursuit of terrorist leaders and our commitment to the enduring defeat of Isis and other terrorist organisations,” he said.

The removal of the founder of Isis, one of the world’s most wanted terrorists, comes at a pivotal point in US foreign policy in the Middle East. Mr Trump had been under fierce criticism from members of his own party for his abrupt withdrawal of US troops from northeastern Syria earlier this month at the bequest of Turkey, which subsequently invaded the Kurdish-controlled region. News that Baghdadi has died may serve to quell Republican unrest about the president’s foreign policy.

But military experts warned that the removal of the Isis leader may not completely suppress Isis, amid concerns of a new alliance between the militant group and al-Qaeda affiliates in the northwest of the country.

Defence secretary Mark Esper later told CNN the US would “go after” any future leaders who may emerge following Baghdadi’s death.

During a lengthy press appearance announcing the raid on Sunday in which the president described how he watched the raid unfold in the Situation Room “as though you were watching a movie”, the US president had harsh words for European countries, which he has accused of not taking responsibility for citizens who have gone to the Middle East to fight for Isis.

“If you don’t take them I’m going to drop them right on your border and you can have fun capturing them . . . We have a lot of water between our country and them,” he said.

While Republicans lauded the news, some Democrats questioned Mr Trump’s decision not to brief senior congressional figures including House Speaker Nancy Pelosi in advance of the attack, in keeping with precedent. While she welcomed the news of Baghdadi’s death, Ms Pelosi added: “The death of this Isis leader does not mean the death of Isis.”