Democrats denounce decision as ‘brazen example’ of US president’s ‘corruption’ 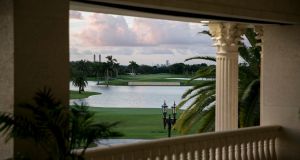 The Trump National Doral Miami, in Florida, which will host the G7 summit in June next year. Photograph: Ilana Panich-Linsman/New York Times

The Trump administration has selected a Trump hotel in Florida as the location for next year’s G7 summit in a move that has sparked widespread concerns about ethics violations by the US president.

“It makes perfect sense,” acting White House chief of staff Mick Mulvaney said as he announced that the Trump National Doral Miami, in Florida, would host the gathering of world leaders next June.

“This was far and away the best choice,” he said, noting that the property was a “huge facility” with three golf courses and lots of open space.

He disputed suggestions that the president would profit from the site selection. “He’s not making any money off of this,” he said, noting that “Donald Trump’s brand is probably strong enough as it is.”

Mr Mulvaney said twelve properties had made the shortlist for the event; a team visited ten of those and the list was finally whittled down to four – the Trump hotel in Miami, two facilities in Utah, and a property in Hawaii.

Mr Trump has previously faced criticism for the use of his properties in Doonbeg, Co Clare, and in Turnberry, Scotland. The Democratic-controlled House of Representatives oversight committee is already investigating the decision by vice-president Mike Pence to stay at Doonbeg during his visit to Ireland last month.

The US air force has opened a review into its layover policy following reports that members of the US military stayed at Mr Trump’s hotel in Scotland.

Democrats denounced the decision to host the G7 summit at the Miami location. “The administration’s announcement that President Trump’s Doral Miami resort will be the site of the next G7 summit is among the most brazen examples yet of the president’s corruption,” said House judiciary committee chairman Jerry Nadler. “He is exploiting his office and making official US government decisions for his personal financial gain.”

The announcement came as Democrats continued their impeachment inquiry into Mr Trump, despite the sudden death of Elijah Cummings, the head of the House oversight committee  and a towering figure in the US Congress.

On Thursday, Gordon Sondland, the US’s ambassador to the European Union, became the latest witness to appear before the congressional committees leading the inquiry. He has played a key role in US engagement with Ukraine – a central focus of the impeachment investigation.

In a prepared statement presented to the committees, Mr Sondland said he was urged by Mr Trump to work with Rudy Giuliani on Ukraine policy. He told the panel in a closed-door hearing that he did not realise that Mr Giuliani’s objective may have been to “involve Ukrainians, directly or indirectly, in the president’s 2020 re-election campaign.”

House Democrats are investigating Mr Trump’s move to encourage the Ukrainian government to investigate former vice-president Joe Biden and his son Hunter during a July phone call with the Ukrainian president.

He also appeared to confirm that Mr Trump had demanded a quid pro quo from Ukraine as a condition for giving aid to the country. He said that the US administration had demanded that the Ukrainian government look into allegations of corruption, including possible interference in the 2016 election, before a financial aid package was released. “That’s why we held up the money,” he said.

He also denied having any involvement in pressurising the Ukrainian government to investigate the Bidens. “I was never in a conversation that had the word Burisma in it,” he said, a reference to the Ukrainian gas company that employed Hunter Biden as a director while his father was vice-president.