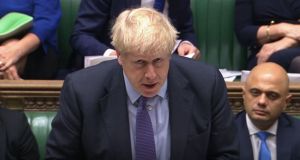 British prime minister Boris Johnson: “There will be some light-touch measures to ensure there is no illegal trade in endangered animal species and banned firearms.” Photograph: PA

Boris Johnson came under fierce criticism from Northern Ireland unionists on Tuesday as MPs debated the Withdrawal Agreement Bill (WAB), which puts his Brexit deal into British law. Opening the debate, the prime minister struggled to answer detailed questions about the deal’s implications for Northern Ireland from the DUP and Independent unionist Sylvia Hermon.

Mr Johnson said the deal ensured that Northern Ireland would leave the European Union with the rest of the United Kingdom, “whole and entire” and achieved what few thought possible. Asked about the fact that goods shipped from Northern Ireland to Great Britain would have to be accompanied by an “exit summary declaration” to comply with EU customs rules, he insisted that trade from west to east would remain unfettered.

“There are no checks from Northern Ireland to Great Britain. There will be some light-touch measures to ensure there is no illegal trade in endangered animal species and banned firearms,” he said to laughter from the opposition benches.

“The most important point is that even these measures evaporate and are terminated automatically. They automatically dissolve unless a majority of the Northern Ireland Assembly in Stormont votes to keep them.”

‘We are not fools’

Lady Hermon complained that the Bill gave no details of the mechanism by which the assembly could, by a simple majority, vote to leave the customs and regulation arrangements after four years.

“I say clearly to the prime minister: do not take the people of Northern Ireland for fools. We are not fools. He needs to explain in detail how his new consent process will operate,” she said.

Former Conservative minister David Lidington said there were advantages for Northern Ireland in the deal, which would guarantee an open border between North and South and ensure that people living along the Border need not fear a return to violence. But he said the government should address unionist concerns and help businesses to deal with the extra bureaucratic burden the new arrangements would bring.

Labour leader Jeremy Corbyn said that the more divergence between Northern Ireland and Great Britain, the harder will become the border in the Irish Sea. Mr Corbyn said the prime minister was trying to blindside MPs by rushing the legislation through parliament in three days.

“So much for parliament taking back control. Parliament is being treated as an inconvenience that can be bypassed by this government,” he said.

MPs voted by 329 to 299 to give the Bill its second reading, a majority of 30 that saw 19 Labour MPs voting with the government. But the House rejected the government’s short timetable for the Bill’s passage, voting against the programme motion by 322 votes to 308.

The DUP voted against the government on both the second reading and the programme motion and the party’s 10 votes proved decisive in ensuring the government’s defeat on the timetable.