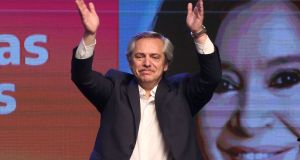 Conservative president Mauricio Macri conceded defeat in Argentina’s election Sunday night to pave the way for the Peronist centre-left to return to power under Alberto Fernandez.

Frustrated voters moved for a change of leadership, signalling their rejection of the incumbent’s handling of a bruising economic crisis that has sunk many into poverty.

The result was expected to rattle financial markets and possibly further depreciate Argentina’s already weak currency, amid concerns of a return to the interventionist policies of former president Cristina Fernandez, who is Alberto Fernandez’s vice presidential running mate.

Opponents believe she would be the power behind the throne in a Peronist government — a fear dismissed by the candidates.

Thousands of the two Fernandez’s supporters crowded their campaign headquarters in a jubilant celebration waving sky-blue and white Argentine flags and chanting “We’re coming back! We’re coming back!”

“Today, Alberto is the president of all Argentines,” said Ms Fernandez, who governed Argentina from 2007 to 2015.

“He will have a very hard task ahead of us that will require the cooperation of all Argentines.”

She blew kisses at the crowd and thanked supporters who brandished tattoos with her image and the image of her late husband and predecessor as president, Nestor Kirchner, who died nine years ago on Sunday.

Mr Fernandez thanked all Argentines, paid homage to the late Mr Kirchner and said he would need the support of Mr Macri’s administration to reconstruct what he called the inherited “ashes” of Argentina.

“The only thing that concerns us is that Argentines stop suffering once and for all,” he told the crowd. “We’re back and we’re going to be better!”

Earlier in the evening, Mr Macri told disappointed supporters at his headquarters that he had called Alberto Fernandez to congratulate him.

He needs 45% support, or 40% support with a 10 percentage point lead, over the nearest rival to avoid a runoff vote on November 24th. The result still needs to be confirmed.

Mr Macri was elected president in 2015 promising to jumpstart the country’s economy. – PA