‘Embarrassing’ Trump told Ireland is not part of UK 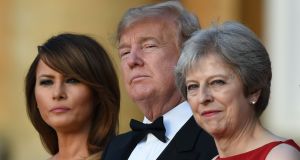 US president Donald Trump with first lady Melania Trump and British prime minister Theresa May prior to their dinner at Blenheim Palace on Thursday night. Photograph: Geoff Pugh/AFP/Getty Images

Donald Trump’s incendiary newspaper interview on the eve of his first official visit to the UK, in which he took aim at Theresa May’s Brexit plans and suggested Boris Johnson would make a great prime minister, has been met with outrage by MPs.

Many have accused him of “disrespecting” the nation and suggested Ms May should show him the door.

In the US, Democratic Congressman Brendan Boyle took issue with Mr Trump’s comment that he was popular in Britain despite the protests planned around the country. Mr Trump had said in the interview: “I believe that the people in the UK – Scotland, Ireland. they like me a lot.”

Mr Boyle pointed out to the president that “Ireland is not part of the UK. It’s been an independent country for about 100 years ... Please stop embarrassing us on the international stage.”

Mr Trump, who met the British prime minister for bilateral talks at her Chequers residence on Friday, was heavily critical of her Brexit plan and called into question any future UK-US trade deal. “If they do a deal like that, we would be dealing with the European Union instead of dealing with the UK, so it will probably kill the deal,” he told the Sun newspaper.

Conservative MP Sarah Wollaston said Mr Trump was “determined to insult” Ms May and added that “The divisive, dog-whistle rhetoric in his Sun interview is repulsive. If signing up to the Trump world view is the price of a deal, it’s not worth paying.”

Ben Bradshaw, Labour MP for Exeter, called the courting of Trump by the UK “humiliating”. “Our prime minister is so weak she still rolls out the red carpet for a man who does nothing but insult her. Humiliating,” he wrote.

Dear @realDonaldTrump - Ireland is not part of the U.K. It’s been an independent country for about 100 years. It was kind of a big deal.
Please stop embarrassing us on the international stage. Thanks. https://t.co/ds5d8hH1NX

.@realDonaldTrump determined to insult our PM. The divisive, dog-whistle rhetoric in his @TheSun interview is repulsive . If signing up to the #Trump world view is the price of a deal, it’s not worth paying

Our Prime Minister is so weak she still rolls out the red carpet for a man who does nothing but insult her. Humiliating https://t.co/8OfSJv4fF8

Well this has gone well then. What a humiliating week for Britain (excluding the valiant efforts of our football team!). https://t.co/9cmE8Rn5am

The theory that if we are nice to Trump he’ll be nice to us doesn’t seem to be going brilliantly... https://t.co/5fXClwHoCG

It is beyond extraordinary. Trump holds Britain in complete contempt. Mrs. May should reciprocate, cancel tomorrow’s meetings and ask him to leave. Lets get off our knees as a country, walk tall and stop conniving in the new lows and humiliations wrought on us by Brexit

Darren Jones, Labour MP for Bristol North West, echoed those sentiments, writing: “Well this has gone well then. What a humiliating week for Britain (excluding the valiant efforts of our football team!).”

Former Labour Party leader Ed Miliband tweeted a link to a news story about Mr Trump’s comments, and said: “The theory that if we are nice to Trump he’ll be nice to us doesn’t seem to be going brilliantly ...”

Labour MP Anna Turley questioned whether the US president should now be allowed to meet the Queen during his four-day visit. He is due to take tea with her at Windsor Castle on Friday afternoon.

“Trump is a racist and disrespects our nation. Why does he get to meet our Queen? And those Tories saying we should respect him simply because he is elected president – by that logic shouldn’t he respect our prime minister and London’s mayor?” tweeted the MP for Redcar.

In his interview the president criticised London mayor Sadiq Khan, saying he had done “a bad job” on terrorism and that there had been too much immigration in Europe.

Rupa Huq, the Labour MP for Central Ealing and Acton, said: “A dash of Islamophobia lobbed at Sadiq Khan who he blames for terrorism. Awful stuff.”

Stella Creasy, the Labour and Co-operative MP for Walthamstow, condemned what she saw as “Trump’s demonisation of immigration and UK” and wrote: “Time to stop holding his hand and instead start holding the door open for him.”

In 2017 the speaker of the House of Commons, John Bercow, vetoed the idea of Mr Trump speaking inside the chamber , saying Mr Trump was unfit to address MPs, because of parliament’s opposition to to racism and to sexism.

Another Labour MP, Lilian Greenwood, shared a picture of Barack Obama, writing that Brits love a US president “worthy of the title”.

There was little in the way of notable responses from pro-Brexit MPs to Mr Trump’s Sun interview. However Jacob Rees-Mogg, leader of the European Research Group of pro-Brexit Tory MPs, tweeted a link to it without comment. – Guardian