US midterm elections: the stakes are high in swing state Nevada 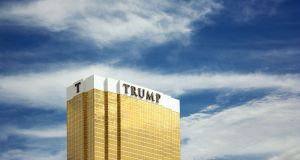 Leaving behind the hot desert landscape of Arizona and driving northwest towards Nevada, signs for the Hoover Dam begin to appear. The phenomenal feat of engineering, completed in 1935, was designed to control the flow of the Colorado river and supply electricity and water to the vast arid lands of the southwest of the United States.

More than 80 years later, it acts as a man-made border between the neighbouring states of Arizona and Nevada.

Just beyond the great concrete dam, deep in the valley, lies Las Vegas. Its distinctive skyline and glistening lights can be seen for kilometres. The city has drawn visitors for generations. While its liberal marriage and gambling laws continue to attract millions of tourists, it has also developed as an important commercial and residential city, growing rapidly over the past two decades.

Nestled in the southern tip of Nevada, Las Vegas and the surrounding Clark County is by far the biggest urban centre in the state. About three-quarters of Nevada’s three million residents live in Clark County. The rest of the population mainly live in Reno and the nearby Carson City in the north, with the remainder scattered around the vast, mostly public, land that makes up the remainder of the US’s seventh-largest state.

Las Vegas has had its fair share of problems. Eight months ago a gunman opened fire from the Mandalay Bay Hotel on its famous strip, killing 58 concert-goers and wounding hundreds more.

The city, and Nevada generally, were among the worst-hit areas by the 2008 recession. Unemployment reached more than 13 per cent – the highest in the country in 2010 – while foreclosures hit the greater Las Vegas region hard, prompting a real-estate collapse.

Today Nevada finds itself in the news for other reasons. The state, which borders California to its west and Utah to its east, is set to be one of the most closely watched states in the US this November, as voters go to the polls in the midterm elections.

At state level, Nevadans are due to elect a new governor, lieutenant governor, attorney general and representatives for its state legislature. Additionally, voters will decide which six representatives it will send to Washington. But it is the state’s Senate race that is particularly significant.

Incumbent senator, Republican Dean Heller, faces one of the toughest races in the country; he is one of the few Republican senators running in a state that Hillary Clinton won in 2016. Heller has struggled with the new Donald Trump brand of Republicanism.

Mindful of the need to keep moderate voters in his state on board, he has publicly clashed with the president on several issues, although in Washington he has stayed onside with Trump in most Senate votes – a record his Democratic rivals are keen to highlight.

Democrats believe the Senate race is theirs to win, with Jacky Rosen, a first-time Congresswoman and middle-ground politician, contesting the Senate election.

Nevada has emerged as an important swing state in recent elections. Though it has not had a Democratic governor for almost 20 years, it narrowly voted for Clinton in 2016 and is increasingly leaning Democrat, not least because of its growing Latino population.

The final presidential debate of the 2016 election between Clinton and Trump was held in Las Vegas, less than three weeks before the election – a sign of the crucial importance the state played in the national race.

Now, 18 months later, both parties have Nevada in their sights again. Donald Trump flew to Las Vegas last week in an attempt to rally support for Heller at the Republican state national convention.

While the president had threatened to back rival Danny Tarkanian as the Republican nominee because of his frustrations with Heller, he backed off in March, helping to persuade Tarkanian to run for the House of Representatives instead and leaving the Senate race wide open for the embattled incumbent.

Trump may have put his past differences with Heller behind him, Republican Party activists are worried about Heller’s chances. In a fiery speech in Las Vegas last month, the president said he would be back in Nevada to campaign for Heller before November’s election, unveiling a new nickname for Heller’s Democratic opponent: Wacky Jacky.

Democrats are also pouring money and resources into the state, sensing that 2018 could be their opportunity to turn this purple state a permanent blue.

Part of this effort is an extensive grassroots campaign to get the vote out in November. Manuel Ayala works with NextGen, a nationwide organisation that aims to increase youth political engagement and ensure all those who are entitled to vote do so.

On a stifling midweek afternoon, he and his colleague Danielle Fitzgerald are stationed outside a supermarket in suburban Vegas. Clipboards in hand, their aim is to sign people up to the electoral register.

As they politely approach shoppers in this middle-class suburb a few kilometres west of the Las Vegas strip, the results are mixed. One woman says she has no time to talk; another rants about Donald Trump as he waits for his wife.

After a few failed attempts, Ayala successfully engages a young man called Isaac in conversation. Although he is already on the register, he agrees to sign up to NextGen’s email list. In addition to the official federal voting form, NextGen also offers a “pledge to vote” card, working to build a network of youth voters with whom it will continue to engage right up to the election.

NextGen is one of a number of organisations around the country that is focusing on the youth vote ahead of November’s elections.

It was established in 2013, and initially focused on climate-change issues, but it decided to broaden its remit after the 2016 election. Tyson Megown, state youth director for NexGen Nevada, believes 2016 prompted a new wave of political engagement.

“Hands down, there has been a shift since 2016. Turnouts in the primaries in this state this month was double what it was the last time. For a primary election, that’s unheard of – most folk don’t wake up until the general election. But this time, people were coming out in droves,” he says.

NextGen has identified 11 states where it believes progressives may make inroads – including Nevada. The state has a particular problem with youth turnout. According to a 2014 poll by Tufts University, just 17 per cent of 18- to 24-year-olds turned out to vote in the last midterm elections in 2014.

Megown says it is not just about registering people to vote – it’s about maintaining that political engagement. “It’s always been a struggle to get young people engaged. There are a lot of moving pieces involved in turning someone into an informed voter and a regular voter. We begin at high-school age, as soon as they are eligible to vote, and build relationships, talking to them about the issues they care about.”

While some of the issues affecting young voters remain the same – the cost of college tuition and healthcare, for example – there are also issues particular to Nevada.

Tia Yap, regional organisational director for NextGen, says that gun control is high on the agenda for voters in the wake of the mass shooting last October. “It is definitely something that is coming up with voters. Regardless of their political affiliation, most people want action from the state and federal government on gun legislation,” she says.

Although Las Vegas did not see the same level of young voter engagement that swept the country after the Parkland shooting in Florida in February – perhaps in part because the Florida shooting took place within a school setting – there was a knock-on effect after Parkland, with protests also taking place in Nevada.

In the medium term, NextGen is hoping to target 250,000 voters in the state in the run-up to November through a combination of grass-roots campaigning in the community and on college campuses, digital advertising and direct mail.

Ultimately, Megown believes it will pay off, and that 2018 could be a turning-vote for America’s youth voice. “In the short term I think you’re going to see record turnout in 2018. I think across the board you are going to see a more progressive slate of candidates who will start to hold elected office, a more diverse set of candidates – both racial and gender,” he says.

But he also believes that people are going to stay this fired-up in the long term. “Once they learn the process, learn the power and the impact they have in their democracy, that doesn’t go away. We’re not only encouraging them to participate in our democracy, we want them running for office,” he says, predicting that some of those he is working for now, he will be working for in 10 years when they run for elected office.

“That’s incredibly exciting. We help light that spark, we fan the flame, and we see where it takes them.”

Tomorrow: Suzanne Lynch reports from Carson City and Reno on the midterm elections campaign in Nevada