In undiplomatic barrage, US president says Boris Johnson ‘would be a great prime minister’ 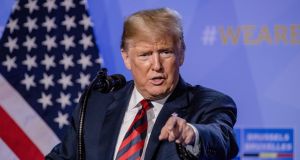 US President Donald Trump criticised Theresa May for the way she handled Brexit negotiations saying “she didn’t listen to me” . Photograph: Marlene Awaad/Bloomberg

US president Donald Trump has begun his first official visit to Britain with an undiplomatic barrage against prime minister Theresa May, saying her Brexit blueprint “will probably kill” any bilateral trade deal between the two allies.

“If they do a deal like that, we would be dealing with the EU instead of dealing with the UK, so it will probably kill the deal,” Mr Trump told the Sun newspaper. Mr Trump also criticised Ms May’s handling of the Brexit talks as “very unfortunate”.

In a comment that will be unwelcome in Downing Street, he said Boris Johnson “would be a great prime minister”. On Monday, Mr Johnson resigned as foreign secretary in protest at the Brexit plan and could yet launch a leadership challenge to Ms May.

The comments are embarrassing for Ms May, who faces huge political criticism for hosting Mr Trump in Britain, where he arrived on Thursday on a three-day visit. Mr Trump and his officials had frequently said that the UK would have priority in terms of a trade deal once the conditions of its departure from the EU allowed for negotiations.

“It is not the act of an ally or special relationship,” Thomas Wright, a foreign policy expert at the Brookings Institution, said of Mr Trump’s comments. “It is a predatory policy towards Brexit Britain that is designed to take advantage of their vulnerability and need for trade deals.”

Mr Wright said that relations between the US and UK “are now at their worst point since the Suez crisis”, referring to the 1956 hostilities between Egypt and Britain and its allies over nationalisation of the Suez Canal.

Mr Trump’s remarks were an unprecedented intervention that critics said undermined the British prime minister. In 2016, then president Barack Obama came under fire for intervening in the Brexit debate during a visit to the UK three weeks before the vote.

After Mr Obama said the UK would go to “the back of the queue” for trade deals if it left the EU, Nigel Farage, the pro-Brexit politician, accused him of “talking down Britain”. But Mr Wright said that while Mr Obama had been invited to intervene by David Cameron, then prime minister, Mr Trump was challenging the current leader of Britain.

Mr Trump’s dramatic comments in Britain followed a tense two-day Nato summit in Brussels where the US president stunned his fellow Nato leaders with a string of attacks on US allies, and particularly Germany and Angela Merkel, its chancellor.

“I am sure this infuriates almost everybody in Britain,” said Gary Hufbauer, a trade expert at the Peterson Institute for International Economics. “He has managed to step on more toes in his brief trip to the UK, which was supposed to be a love-in after Nato.”

Mr Hufbauer said there were political and technical dimensions to Mr Trump’s move. He said that while the soft Brexit proposed by Ms May would limit some elements of a possible UK-US trade deal, there were plenty of areas where a deal could be struck. “I don’t think it is such a lockout as Trump said that ‘it is either us or them’.”

The prospect of a speedy trade deal had been a significant factor in Ms May’s decision to invite Mr Trump to the UK. At a dinner on Thursday night at Blenheim Palace, she again tried to push the matter, heralding the opportunity “to tear down the bureaucratic barriers that frustrate business leaders on both sides of the Atlantic”.

She tried to woo Mr Trump by quoting Winston Churchill, the former UK leader whose bust Mr Trump returned to the Oval Office, and by pointing out that 1m Americans work for British companies in the US.

After the dinner and the publication of the Sun interview, Liam Fox, UK trade secretary, wrote on Twitter: “Terrific to hear @POTUS @realDonaldTrump talk so positively about UK & US Trade tonight at Blenheim Palace.”

Ms May concedes that her Brexit plan, which involves continuing alignment with EU rules on goods, would restrict the scope for trade deals. But a government White Paper on Thursday said that, after leaving the EU, Britain could still “strike new trade deals around the world, in particular breaking new ground for agreements in services”.

In another unwelcome remark for Ms May, Mr Trump said he agreed with Mr Johnson’s desire for a hard negotiating line with the EU. “I would have done it much differently. I actually told Theresa May how to do it but she didn’t agree, she didn’t listen to me.”

He told the Sun that “she probably went the opposite way” and that “the deal she is striking is a much ­different deal than the one the people voted on”.

Sarah Huckabee Sanders, the White House press secretary, played down the criticisms of the British leader in the Sun interview, saying Mr Trump “likes and respects prime minister May very much”.

“As he said in his interview with the Sun she ‘is a very good person’ and he ‘never said anything bad about her’. He thought she was great on Nato and is a really terrific person,” Ms Huckabee Sanders said. “He is thankful for the wonderful welcome from the prime minister here in the UK.”

Mr Trump’s comments also differed from remarks he made earlier on Thursday at Nato where he said it was “not for me to say” if Ms May was taking the correct approach.

Asked at Nato whether he thought the UK should pursue a hard Brexit, Mr Trump said: “Brexit is Brexit ... The people voted to break it up, so I would imagine that’s what they’ll do, but maybe they’re taking it a little bit of a different route. So, I don’t know if that’s what they voted for. I just want the people to be happy.”

The drama on Thursday came on the heels of comments earlier this week where Mr Trump said the UK was in “turmoil”, following the resignation of Mr Johnson and David Davis, another cabinet member. He also suggested that he might speak to his “friend” Mr Johnson during his visit.

In his Sun interview, Mr Trump also renewed his attacks on Sadiq Khan, London’s first Muslim mayor, who he said had done a “very bad job on terrorism”. As Mr Trump prepared to arrive in the UK, Mr Khan urged protesters to avoid violence while at the same time offering an indirect criticism of the American president.

“Having a special relationship means that we expect the highest standards from each other, and it also means speaking out when we think the values we hold dear are under threat,” Mr Khan said.

On Friday, tens of thousands of Britons are expected to march in protest at Mr Trump. A large “Human Rights Nightmare” banner has been unfurled by Amnesty International activists across the river Thames on Vauxhall Bridge in London.

At the Nato news conference, however, Mr Trump said, “I think they like me a lot in the UK.” A recent YouGov poll found that Mr Trump’s favourability rating in the UK was minus 60.

He is holding talks with Ms May and Jeremy Hunt, the new UK foreign secretary, on Friday morning. He is expected to hold a joint press conference with Mrs May shortly after lunch – an event where they will both be pressed on his trade comments. – Copyright The Financial Times Limited 2018

Life under Level 4: What restrictions will look like if lockdown is eased