UK’s Brexit White Paper – all you need to know

Cliff Taylor: EU will be glad that UK has finally tabled a proposal, but differences remain 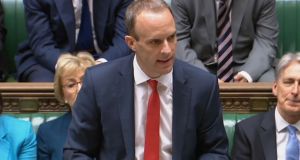 What was the White Paper published by the UK government about?

Since the UK voted to leave the EU more than two years ago, it has been clear that a key issue would be the nature of the future relationship between the two sides. The White Paper is the first detailed attempt by the UK to spell out its view of what this should look like.

What is the overall theme of the document?

In general it underlines the move to a softer version of Brexit signalled after the recent meeting of the UK cabinet at Chequers. It envisages a close trading and economic relationship between the UK and the EU in the years ahead, particularly for goods and ongoing close co-operation in other areas.

What are the details?

The UK is seeking an “association agreement” with the EU, covering trade, security, foreign policy and membership of EU agencies covering areas such as aviation and pharma. It proposes a “free-trade area” with the EU, meaning no customs duties or tariffs on goods. And the plan confirms that the UK wants to continue to follow EU rules, regulations and product standards for goods and agricultural products. However it wants the UK parliament to decide if it will adopt any new EU rules. And the UK would set its own regulations for services and the digital economy.

How will the EU respond?

The EU side will be glad that the UK has finally put something on the table and that it is moving to a more credible position in some areas, such as services and possibly migration. But there remain huge differences. On customs, a key issue is how duties and controls will be imposed on products coming into the UK from third countries and destined for the EU market.

In relation to single market rules and regulations, the EU side has consistently said the UK cannot choose to be in one part of the single market but not in the whole thing. In broad terms, the EU will fear that the UKside is trying to keep some of the benefits of membership while still being free to negotiate its own trade deals with countries such as the US.

Ireland will welcome signs of a softer Brexit and the commitment to free trade in goods and agricultural products. However the Government will realise the problems the EU side will have. And while the UK has promised to sign up to a legally-binding text on the Irish Border backstop, intended to guarantee no hard Border no matter how the talks play out, it remains to be seen what exactly it will agree here.

To progress beyond October, the two sides will need to agree a political declaration on what the future relationship will look like. The detail will take some years to negotiate. The question is whether there is enough common ground to agree this political statement. The second key issue needed to progress is a final deal on the withdrawal agreement, which will require agreed wording on the backstop.