UK Politics: The fainter our memory of trauma, the greater our appetite for risk 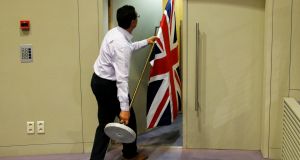 Heading for the door... an EU official in Brussels carries a Union Jack. Photograph: Francois Lenoir/Reuters

A century after Passchendaele, the death site of hundreds of thousands of allied and German soldiers, the causes of the first World War remain contested. Among the scholarly guesses is that Europe was mesmerised by its own long peace. The concert of empires that had averted general continental violence also inured populations to the reality of it. They went to war in a jingoist stupor because they lacked the recent experience to know better.

Today, nothing on the turbulent horizon of the western world equals that war. It is turbulent all the same. There is a similar feeling of a liberal order besieged and, dare we say, a similar sense of innocents volunteering for trouble without really knowing it.

There is an accepted explanation for Brexit, Donald Trump’s US presidency, Jeremy Corbyn’s Labour Party and other unconventional movements of the day. Voters are upset about stagnant wages and the crash. Elites have disgraced themselves with material excess and technocratic fumbles. People are interested in drastic change because things have been so bad.

This remains the best guess. But the opposite view is worth entertaining. What if the Petri dish of radicalism is not mass suffering but prolonged order? What if electorates flirt with high-risk change out of complacency born of (relative) good times?

The median Briton, who is 40, has no recollection of national crisis: no devaluation, no three-day week, no conscript war, none of the floor-to-ceiling greyness of the postwar years, when austerity entailed the rationing of basics and not just tight public-sector pay settlements, none of the little humiliations that came with being poorer than other European countries and shut out from their embryonic project of union.

Even the background spectre of a world-ending nuclear exchange had more or less passed by the time this notional citizen became a teenager. The worst ordeals were an invasion of Iraq conducted by an all-volunteer army and a crash in which unemployment peaked at 8 per cent.

To remain vigilant after such a benign experience of history is too much to ask. The temptation is to treat order and gradual progress as things ordained by nature – to believe that electoral choices cannot threaten these cosmic entitlements. Politics becomes a kind of elevated sport: a means of venting and expressing oneself at low risk.

Nor is it a clinching counter-argument that older voters turned out for Brexit. Even they have spent the past few decades in a secure, well-governed country that steered resources to their own generation. Their propensity to take it all for granted will have grown with each of those passing years.

If this is a harsh reading of the electorate, it may at least serve as a verdict on the political class. Consider the breeziness of Boris Johnson, the foreign secretary, and David Davis, the Brexit secretary, or the ministerial bickering of recent weeks, or the personality cult that forms around any MP who seems a character.

There is a frivolity to politics that is too easy to blame on the rich-kid takeover of public life. These are not all scions of the gentry re-living their election to Pop at Eton. The telling variable is generation, not class. Harold Macmillan had social advantages to embarrass any of them, but the prime minister from 1957 to 1963 also sustained wounds in the first World War and feigned death to escape enemy soldiers. After that, a certain seriousness tends to come over a man.

There is nothing like the fresh memory of loss to discipline a person – or a nation. It explains why the populist surge that seemed pan-western looks decidedly Anglo-American. Continental Europe has a sharper sense of the tragic and therefore of the stakes. Germany was split until 1990. Spain did not join the EU until 1986. France has had enough brushes with zealots of left and right to keep it honest.

None of this is argued with certainty. But if the received view is right, and people have turned to the fringes as a reaction to hardship, it follows that the wartime generation (who tasted the ultimate hardship) and their children (who lived in the sickly Britain of the 1970s) should have done the same.

Instead, they voted for the mass moderation of Butskellism and Blatcherism, when governments were interchangeable and consensus was stifling. They avoided risk for the same reason no one touches a hot pan twice.

The fainter our memory of trauma, the greater our appetite for risk. If the analysis is bleak, then its implication is bleaker. Countries have to try bad ideas once in a while to remember they are bad.