Lack of UK paper on Brexit bill ‘may stall talks’ 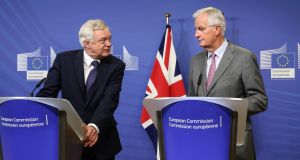 The reluctance of UK negotiators to put on paper their objections to Brussels estimates of the British “divorce” bill is in danger of stalling the Brexit negotiations that got under way in working groups on Tuesday, EU diplomatic sources said.

The Financial Times reports some convergence on Irish issues but an agreement to do more work on the areas where the Common Travel Area regulations overlap with UK rules on visas and immigration for other states.

EU chief negotiator Michel Barnier is reported to have warned that the talks will not be able to proceed unless the UK comes up with a paper on the “financial settlement” during this round this week.

The Commission’s paper on the issue does not come up with a figure, widely put at a controversial minimum of €65 billion, but sets out a rationale for calculating the liabilities based on the UK’s historic share of EU budget contributions.

Brexit secretary David Davis has acknowledged the United Kingdom has financial liabilities to the EU but from comments he made in a House of Lords committee last week appears to feel that the “proper approach to get the right outcome in the negotiation” would be to “challenge” the EU’s lengthy and complex calculations piecemeal, figure by figure.

Mr Davis told the committee the UK “may well publish an alternative proposal,” but that is not expected this week.

The financial settlement issue is widely agreed by observers to be the thorniest and politically most controversial element of the “divorce” talks.

The discussions on Tuesday broke into working groups on the three priority issues that are the key elements of first-phase discussions ahead of talks on the future relationships between the EU and the United Kingdom - the rights of EU and UK citizens in each others’ jurisdictions post-Brexit, the “financial settlement”, and the Irish-related issues.

The latter group, which met for the first time, was engaged in what was described as a “political discussion” on the Common Travel Area and Belfast Agreement-issues such as citizenship rights and peace programmes.

It will not deal at this stage with technical issues relating to the Border, mostly to do with the free movement of goods, and which are likely to be left the second-phase talks .