Theresa May could survive in office because Tories have no alternative 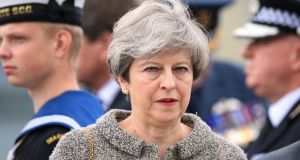 Nothing saves time like taking people at their word. Politics trains you for the opposite: to look for misdirection and hidden motives. When Britain’s Conservative MPs pledged loyalty to Theresa May after her botched general election earlier this month, it seemed they were laughing behind their hands. What they implied – surely – was a plan to let the prime minister serve out some tough months before handing her a cup of hemlock in the autumn.

They still might. She is one scandal or misjudgment from oblivion. But the Tories’ intent turns out to be sincere: they really do want to sustain this unsustainable premiership for a matter of years, not months, perhaps until the scheduled date of Britain’s exit from the EU in 2019. So sure to be among the shortest-serving prime ministers two weeks ago, May can now hope for a tenure in line with James Callaghan, Anthony Eden and other postwar occupants.

Inertia takes many forms but tends to happen for one reason. When a lifeless marriage lasts for decades, when a job is dire but its holder keeps showing up, it is for want of alternatives. Tories have cast around their number, examined candidates to replace May and concluded that rumours of their mediocrity are, if anything, too kind.

Boris Johnson, the foreign secretary, and David Davis, the Brexit secretary, are versions of each other: men whose outward breeziness leaves people in more, not less, doubt about their technical command. Neither was ever opposition leader or chancellor of the exchequer, the two roles that acquaint a politician with the full range of governmental work.

Such narrowness explains so many of May’s own fumbles. Johnson’s erratic streak is famous but Davis’s is just as strong. In 2008, he quit his seat in parliament to stand again. The byelection was fought on a point of libertarian principle that his own (mystified) leader, David Cameron, supported. It made no sense other than as a kind of Dadaist performance art.

Safer than either of these wild cards is Philip Hammond, the chancellor Tories call “Box Office” with an irony that borders on gallows humour. At her worst, May seems to believe that economic growth is ordained by nature – that government just needs to provide social order.

Hammond is more sensitive to the supply side of the economy. He knows it matters whether regulations are light or onerous, taxes competitive or punitive, companies allowed to hire the world’s best or confined to a domestic labour pool.

For all this, committed Leavers remember his support for EU membership and even friends imagine him as a caretaker, which implies three prime ministers in as many years. The Labour opposition could define him as a slightly abler version of May: dry, remote, rooted in the counties not cities.

The least worst candidates for the job are both women and both hamstrung by circumstance. Ruth Davidson has no Westminster seat and no reason to walk away from the electoral gains to which she has led the Scottish Tories. Amber Rudd, the home secretary, retained her own seat by a gossamer-fine margin. The permanent campaign to hold it would create a distracting drama for a national leader. She also has May’s slimness of experience, if more underlying talent.

This, then, is the field arranged against the prime minister. A stoppable force against a moveable object.

And they have another reason for constancy. A year after the vote to leave, it is clear why referendums are so troublesome. The problem is not public ignorance. General elections entail greater complexity, involve more moving parts, and no one argues for their abolition. The problem is the near impossibility of extracting a definitive answer.

Unless a ballot question is ultra-precise or numerical (such as those local government referendums on the rate of council tax) it condemns a country to years of bitter interpretation. A Conservative leadership contest would become the crucible for the poison.

Finding a leader whose view of exit squares the anti-European grassroots with the divided MPs with the riven nation is more trouble than Tories think it is worth – especially if the prize is a leader who constitutes a marginal improvement on May.

Keeping a weak prime minister is not obviously the right decision. But it is obviously the decision. Her fate is that of the caught fish in the Gustave Courbet painting, locked in anguish as it hovers somewhere between life and eventual expiry.