Citi confirms Dublin expansion on the back of Brexit

US bank will ‘increase over time our footprint in other key EU cities including Amsterdam, Dublin, Luxembourg, Madrid and Paris’ 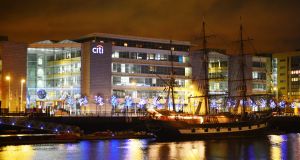 Citigroup confirmed to staff on Thursday that it plans to extend its operations in Dublin, where it employs about 2,500 people

US banking group Citigroup confirmed to staff on Thursday that it plans to extend its operations in Dublin, where it employs about 2,500 people, as the US banking giant prepares itself for the fallout from Brexit.

Jim Cowles, the group’s top executive for the group’s European, Middle East and Africa (EMEA), also confirmed in an internal e-mail that Frankfurt is set to become its EU trading hub, or base for its broker-dealer.

“It is not yet possible to assess the outcome or timing of the Brexit negotiations, but in certain circumstances we may need to create approximately 150 new roles located in the EU. In all cases, London will remain both our EMEA headquarters and an important global hub for Citi.”

Frankfurt is currently home to about 350 Citigroup employees.The German financial capital, where the European Central Bank and its banking supervision arm are based, has been selected by a number of international banks, including Morgan Stanley, Nomura and Standard Chartered as their EU base in recent weeks.

Meanwhile, the chief executive of Deutsche Bank, Europe’s largest investment bank, told employees on Thursday that it plans to book the “vast majority” of its Europe trades in Frankfurt in future.

“There’s an awful lot of detail to be ironed out and agreed, depending on what the trades and regulations turn out to be,” John Cryan, the company’s CEO, said in a video message to staff, according to a Bloomberg report. “We will try and minimise disruption for our clients and for our own people, but inevitably roles will need to be either moved or at least added in Frankfurt.”

A second round of divorce talks between the UK and EU concluded on Thursday, after four days, with little progress. However, financial institutions in the UK are having to move ahead with plans do deal with the prospect of the UK losing access to the single market under Brexit.

Banks, insurers and asset management firms were given a deadline of last Friday to file their contingency plans with the Bank of England.