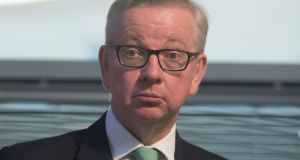 The British government has attempted to reassure Northern Ireland’s farmers about the level of subsidies they will receive after the UK leaves the European Union.

Michael Gove, secretary for the environment, food and rural affairs, visited an agricultural show in Co Antrim at the weekend and also held meetings with the DUP and the Ulster Farmers’ Union.

“Northern Ireland and upland areas of Scotland, Wales and England will receive support in future to ensure communities there can survive,” Mr Gove later told the BBC.

Northern Ireland makes up 3 per cent of the UK population but currently receives almost 10 per cent of its European Union farm subsidies.

Mr Gove has said post-Brexit subsidies will have to be earned rather than being handed out and that farmers must prove they are committed to environmental issues.

His visit to Northern Ireland was brought to public attention by a DUP-branded video posted on Twitter by South Antrim MP Paul Girvan.

Sinn Féin national chairman and South Antrim MLA Declan Kearney claimed Mr Gove had cancelled a scheduled meeting with his party “without prior notice at the very last minute”.

“The Tory deal with the DUP is making it more difficult to reach a resolution to the current political difficulties in the North,” he said.

A spokeswoman said Mr Gove was in Antrim to support the agricultural show and speak to producers. She declined to comment on Mr Kearney’s comments about cancelling his meeting with Sinn Féin at short notice.

The department then issued the following statement, attributed to Mr Gove: “We all care about where the food on our dinner plates has come from and its journey from farm to fork.

“Welsh lamb, with its unique heritage and character, has become a symbol of high quality and great taste around the world and I am thrilled to see this sector going from strength to strength.

“Leaving the EU will provide this hugely successful industry with new opportunities to grow and flourish and I am looking forward to meeting farmers and producers today to hear their views on how we can drive the sector forward.”

Asked about the mention of Welsh lamb in connection with a visit to Northern Ireland, the department’s spokeswoman apologised for the statement and suggested human error at the press office was the reason for it being issued.

The spokeswoman then said that statement related to a visit to Wales.

Northern Ireland politicians made light of the error, with Alliance Party leader Naomi Long saying on Twitter: “Next stop Scotland to promote Bushmills whiskey, then a trip to Cardiff to sample their traditional Cornish pasties...”

Mr Kearney said: “So, maybe Michael Gove pulled out of the meeting with me because he was confused which country he was visiting...?”

When asked for the correct statement on Mr Gove’s visit to Northern Ireland, the department said there was not one.

Mr Girvan said Mr Gove’s visit highlighted the fact that the DUP was working to deliver an agriculture policy “which delivers for farmers, rural areas and the wider economy in particular”.

“We have demonstrated to Government that we take agriculture seriously which can be seen in the commitment to funding for direct support in the supply and confidence deal,” he said.