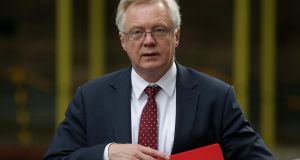 British Brexit minister David Davis: The UK is understood to have demanded a far more detailed breakdown of the EU’s methodology for calculating its financial liabilities, widely estimated at some €65 billion. Photograph: Daniel Leal-Olivas/AFP/Getty Images

The European Union and Britain are moving in the “same direction” in Brexit talks on Ireland and sources believe the “substantial progress” required by October is eminently achievable.

One diplomat said “we’re singing off the same hymn sheet” – in both being committed to common travel rights on the two islands and to continuing peace agreement-based North-South co-operation.

While there are fundamental areas of disagreement in two other priority strands of the first phase of the Brexit talks – discussions on the rights of each others’ citizens post-Brexit and the divorce bill facing the UK – there is a broad accord in the “political dialogue” on Ireland.

The dialogue, with six officials on each side led by deputy EU chief negotiator Sabine Weyand in the Brussels camp and Brexit department secretary Olly Robbins on the British side, focused on Tuesday on the workings of the Common Travel Area (CTA) and what is being termed as the preservation of the Belfast Agreement “in all its aspects”.

The latter refers mainly to 12 areas of cross-Border co-operation between the North and South specified in the agreement, which include tourism, energy and agriculture. The next round of talks in late August is expected to involve the UK spelling out the legal implications of Brexit on all of these areas and how to sustain the co-operation. It is expected that “peace money” issues will be dealt with separately as part of the discussion on the UK “financial settlement”.

One of the hurdles on the CTA is ensuring that London maintains EU levels of data protection, particularly for passenger information. The talks did not touch on the issue of Border customs arrangements, which will form part of the phase-two trade discussions on a future EU-UK relationship.

There was also greater clarity this week over how the difficult issue of the financial settlement will be negotiated. The UK is understood to have demanded a far more detailed breakdown of the EU’s methodology for calculating its financial liabilities, widely estimated at some €65 billion, and is set to question the legal base of each of the EU’s thousands of spending programmes to ascertain what level of “survivable obligations” it has to them .

A similar approach will be taken to the discussion of assets. One British source described the EU’s budget, the Multi-Annual Financial Framework, on which the commission has based its calculations, as a “planning tool” rather than a legal commitment by member states. This is not how the EU27 see it and the financial discussions are likely to prove prolonged and fraught.

In the discussion on citizens’ rights, the UK’s insistence on no continuing role for the European Court of Justice in safeguarding rights in the UK remained the greatest obstacle to progress. A source at the meeting said it was clear more than one person on either side was beginning to discuss what he termed “landing zones” between the two positions.

EU chief negotiator Michel Barnier and British Brexit minister David Davis, who returns from London on Thursday to be briefed on progress, are due to hold a press conference in Brussels .