Dorchester revisited: ‘None of this MeToo crap ... We were there for the charities’

A night at the Dorchester one year on: Presidents Club dinner attendees lament its passing 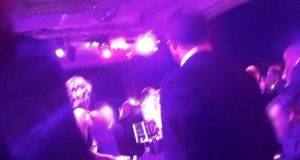 “It was a catastrophe. You shouldn’t have done it. You really should not have done it,” declared one of Britain’s better known property investors this month before he slammed down the phone.

He was responding to a request for an anonymous comment on the demise of the annual Presidents Club Charity Dinner – he had attended the final occasion at London’s Dorchester Hotel in January last year.

Some 12 months have elapsed since the Financial Times first revealed the groping and abuse of a number of the 130 women hired as hostesses at this secretive all-male dinner, attended by 360 of Britain’s leading businessmen and financiers.

People were paying £3,000 a ticket – they didn’t need to go there to pick up girls, they could pick them up anywhere ... There was nothing sexual except temptation. It was a bunch of 45- to 75-year-old men living the dream of ‘Can I get you?'

The FT has since learned that a group of prostitutes were operating around the event, using rooms and suites upstairs at the Dorchester – although there is no suggestion the organisers were aware of such activity.

The ensuing publicity about the dinner triggered two official inquiries and caused the Presidents Club charity to close after 33 years. But in assessing whether it has led to a change in attitudes and behaviour across British business sectors such as property, advertising and investment banking, the FT has received some defiant feedback.

“People were paying £3,000 a ticket – they didn’t need to go there to pick up girls, they could pick them up anywhere ... There was nothing sexual except temptation. It was a bunch of 45- to 75-year-old men living the dream of ‘Can I get you?’

“Okay, I accept there was an upstairs suite at the Dorchester [on the night of] the Presidents Club, and yes, there were hookers, but those weren’t the hostesses.” He said only a small minority of attendees moved to suites and rooms upstairs after the main event. “It happens everywhere,” he added.

‘Women want to be objectified’

Those attending the dinner who spoke to the FT would only do so anonymously; most did not respond to requests for comment. Some of their views highlighted how little attitudes have changed in certain quarters of the business elite.

The charity, which each year donated to causes such as Great Ormond Street Hospital, while spending about £2,000 per head for the annual dinner, announced it was closing last January.

Its trustees, led by Bruce Ritchie, of upscale lettings group Residential Land, and luxury goods specialist David Meller, have said they had no knowledge that sex workers had attended the event and had no awareness of any abuse of the women hired to attend dining tables and assist with the charity auction.

The FT’s revelations triggered a fierce debate across British business and sport over whether events should be routinely adorned with scantily clad women to entertain and excite male guests.

Within days of the Presidents Club announcing its closure, Formula 1 motor racing announced it was phasing out its so-called “Grid Girls” and time was called on the “Walk On Girls” regularly seen on the professional Darts circuit.

But if sex was on the minds of only some of those attending the final Presidents Club dinner, numerous other guests have since admitted they found the event – described by one newspaper as a “groper’s gala” – deeply uncomfortable.

One property executive who was there last year said it was “outmoded” and “odd”. “I did not feel comfortable at all.” He added that the evening felt like “one giant cock-off” – in other words an excuse for rich men to show off about their wealth. It was the first time he had been invited to the event and claimed to have spent much of the evening texting his girlfriend to say: “Oh my god – get me out of here.”

Another former attendee, who went on several occasions over the past decade, said it used to be a classier evening, but seemed “pretty grim” in recent years. Some guests took prostitutes or hostesses to suites upstairs, he said.

The Presidents Club dinner may have become seedier in recent years, but women who came into contact with the organisation – which was originally set up as a charity boxing night – in its earlier days recount similar stories of unpleasant behaviour, abusive practices and inappropriate touching.

Gina Miller, the transparency and anti-Brexit campaigner, told the FT last year that she was asked to work as a hostess at the event when she was working as a model while at university as a mature student. Miller turned the job down when she was told about the dress code and that there was a specific desire to hire women who were “all colours of chocolate and coffee”.

Another former hostess, who worked there in 2015 – the same year that comedian Jimmy Carr hosted the event – described it as “disgusting” and “super uncomfortable”.

“No I did not enjoy it. You don’t get told [what it will be like]. I would not have done it. You’re in desperate need of a bit of extra cash, then you realise: F**k, what have [I] done?

“A few of the girls at the event told me they were prostitutes. They were dressed the same as everyone else ... The men were touching the bottom of my back. They probably thought we were all escorts. It was awful – I felt tricked.”

One past organiser, who also said they knew prostitutes had attended, admitted: “Lots of very high end professional dancers, models and singers were hoodwinked into doing this event. The weirdest thing was that the girls could drink and were encouraged to. That’s a no-no in the hostessing business.

“A small minority [of the hostesses] were very turned on by the wealth, power, money and a free ride. The rest were pure professionals.”

During the past 14 years, the Presidents Club dinner raised £7.3 million, of which just over £5 million was spent on the event, according to Charity Commission filings. With additional donations to the charity, £7.2 million was distributed to good causes.

In the wake of the FT investigation, charities that previously received Presidents Club donations vowed to improve their due diligence procedures, while large companies have moved to improve standards at events they hold or are associated with.

The legality of non-disclosure agreements, which many of the hostesses were made to sign without reading, is being scrutinised by the government. MPs are also considering imposing a mandatory duty on employers to prevent workplace harassment.

Sam Smethers, chief executive of the Fawcett Society, which is campaigning for employers to provide greater protection against sexual harassment in the workplace, said: “The FT investigation was hugely significant. It revealed both an extreme and shocking level of sexual harassment and abuse that women were expected to tolerate simply for doing their job.” She said it also showed the sort of behaviour that occurred at events involving leading charities and “respectable” corporates.

She added: “It sent the clear message that if something like this was possible then casual sexual harassment at work is normalised and just something women put up with.” – Copyright The Financial Times Limited 2019

Nieces for a Night

An online search for the “Bond Street Horticultural Society” yields few results – at least nothing that hints at its true nature as a regular, and secretive, dinner held at Buck’s, a gentleman’s club in London’s Mayfair that was founded 100 years ago and is best known as the home of the Buck’s Fizz cocktail.

The BSH Society is the affectionate moniker for an evening known to Buck’s members in baser terms: “Nieces Night.”

Several times a year, the mainly elderly membership are encouraged to invite along female guests – preferably women in their 20s, but certainly not in any way related to members by blood or family.

It is a chance for all concerned to dress up for the evening. The women are rotated between dining tables, moving with each course.

Some women who have attended in the past said they were thrilled by the invite. “I’ve only ever had a very fun evening at Buck’s, it’s all very light hearted and the gentlemen are all very old school and as posh as you would expect. I attended with an old boss of mine who I’m still very good friends with despite our age gap,” said one former guest. “Everyone stays and gets rather boozy on champagne and cigars on the balcony. There’s also usually a game of indoor cricket which is super fun.”

Other women known to have attended were uncomfortable discussing the evening at all, but friends of former female guests said it could be an unpleasant affair. One said they were somewhat taken aback to say the least by the outdated male environment: “It’s vile.”

No one from the club itself was prepared to comment. Rupert Lendrum, the club secretary, said: “I’m not going to give any detail of any nature about what goes on in this club.”

Friends of club members say news of the Presidents Club exposé a year ago triggered an internal discussion about whether their own female-focused event might be an anachronism. The debate decided “No” – Nieces Night should continue. – Copyright The Financial Times Limited 2019