Juan Guaidó came out of hiding to make public address, amid protest and civil unrest 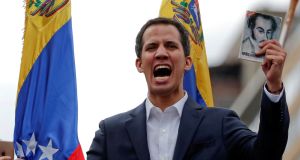 Juan Guaidó, leader of the Venezuelan opposition holds a copy of Venezuelan constitution during a rally against Nicolás Maduro’s government in Caracas. Photograph: Carlos Garcia Rawlins/Reuters

Juan Guaidó, the man backed this week as Venezuela’s interim president by the US, has urged the country’s armed forces to “come over to the side of the people” to bring about fresh elections and a return to democracy.

In his first public appearance since his dramatic challenge to President Nicolás Maduro on Wednesday, the de-facto opposition leader told hundreds of cheering supporters in a leafy square in the Caracas neighbourhood of Chacao that they would eventually triumph.

“In Miraflores [the presidential palace] they think this movement will run out of steam. Those who have usurped the symbols of power think we’re going to tire,” he said. “But Venezuela has woken up and will never sleep again.”

Mr Guaidó (35) has breathed new life into Venezuela’s notoriously fragmented and browbeaten opposition since he became president of the National Assembly, or Congress, this month.

On Wednesday, in the midst of a massive anti-government street protest, he took a self-administered oath, declaring himself Venezuela’s interim president in open defiance of Mr Maduro, who has grown increasingly autocratic since he assumed power in 2013.

The US recognised Mr Guaidó as president, as did almost a dozen countries in the Americas, including Brazil, Argentina, Colombia and Canada.

She said the situation “may rapidly spiral out of control with catastrophic consequences”.

At least 20 people have been killed this week in clashes across the country, and hundreds injured and arrested.

“There is every reason to worry that the government’s response to these protests will follow the same pattern we have been documenting in Venezuela since 2014,” said José Miguel Vivanco, Americas director of Human Rights Watch.

Mr Maduro has reacted angrily to what he regards as a rightwing coup attempt orchestrated by the Trump administration in Washington.

He has ordered US embassy staff to leave Venezuela within 72 hours, a deadline that expires this weekend.

Washington has said it will not heed his call.

Mr Maduro has also said he will close Venezuela’s embassy and consulates in the US and recall all staff.

On Thursday, Mr Guaidó wrote to Mike Pompeo, the US secretary of state, “in my position as President in Charge of the Bolivarian Republic of Venezuela,” asking for food and medicine for the Venezuelan people “and perhaps even the sending of a hospital ship”.

At a meeting of the Washington-based Organization of American States, Mr Pompeo pointedly referred to Mr Maduro as Venezuela’s “former president” and said the US was ready to send $20million (€17.5 million) in humanitarian aid.

The UN Security Council was scheduled to meet on Saturday to discuss the Venezuelan crisis.

Mr Pompeo will underscore US support for the opposition leader and urge other members of the international community to recognise and support Mr Guaidó as the country’s legitimate president, according to a statement from the state department.

Russia’s foreign ministry, meanwhile, has warned that if the US intervenes militarily in Venezuela, it would be “a venture fraught with catastrophic consequences”.

Since his dramatic self-proclamation, Mr Guaidó has kept a low profile and some opposition figures fear the Maduro regime might try to arrest him.

Listening to his speech on Friday, a 75-year-old man who identified himself only as Carlos said: “This is the last chance. We wake up now or we stay silent for the rest of our lives. It’s for Venezuelans to decide.”

Isis Horta, a 39-year-old mother of two, said she still had “a lot of hope” that Mr Guaidó could transform Venezuela with fresh elections and a return to democracy.

Asked what role the armed forces could play in that transition, she said: “I have faith that they will position themselves on the right side of history.” – Copyright The Financial Times Limited 2019