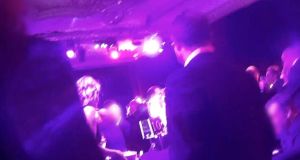 The British charity the Presidents Club is to close following reports that hostesses were harassed, groped and degraded at its men-only annual fundraising dinner at the Dorchester Hotel in London last week.

A Financial Times journalist working undercover at the black-tie event last Thursday, whose 360 guests included businessmen, politicians, celebrities and sports personalities, reported that women staff hired for the dinner were subjected to groping, abuse and other forms of sexual harassment. The behaviour has generated a storm of outrage.

Bowing to mounting pressure, the trustees of the charitable group said late on Wednesday that they would not host any more fundraising events. “Remaining funds will be distributed in an efficient manner to children’s charities, and it will then be closed,” said the club.

David Meller, the Presidents Club trustee who helped organise the dinner, stepped down from the Mayor’s Fund for London and as a nonexecutive director of the British department of education.

A junior education minister, the Conservative MP Nadhim Zahawi, went to the event. A Downing Street spokesman said he “attended briefly and felt uncomfortable at what had begun to happen”.

David Walliams tweets about the event

2) I left immediately after I had finished my presenting on stage at 11.30pm. I did not witness any of the kind of behaviour that allegedly occurred and am absolutely appalled by the reports.

The event’s compere, the comedian, author and actor David Walliams, tweeted that he did not witness any of the harassment and was “absolutely appalled by the reports”.

Two hospitals that have benefited from some of the £20 million (€23 million) or more that the annual dinner has raised over three decades, Great Ormond Street Hospital and Evelina London Children’s Hospital, have expressed alarm at the reported behaviour and say they will return past donations to the organisers. Great Ormond Street described the allegations as shocking and said the hospital would “never knowingly accept donations raised in this way”.

Richard Caring, the owner of the London restaurant The Ivy, bid £400,000 (€460,000) at Thursday’s charity auction to have a new high-dependency unit at the Evelina hospital named after him. “This is not the kind of event we would wish to be associated with,” the hospital said.

Other items auctioned at the event included lunch with Boris Johnson, the British foreign secretary, a lap dance at a Soho strip club, and plastic surgery to “spice up your wife”.

The 130 hostesses hired for the event had to be “tall, thin and pretty”. Madison Marriage, the Financial Times reporter who went undercover at the dinner, said they were told to wear skimpy black outfits with “black sexy shoes” and black underwear. They were promised pay of £150, plus £25 for a taxi home, and had to sign a five-page nondisclosure agreement.

The Financial Times reported that by midnight a “society figure” filled a glass of champagne for a hostess and told her: “I want you to down that glass, rip off your knickers and dance on that table.” A 19-year-old hostess was asked whether she was a prostitute, and a 28-year-old woman reported being repeatedly fondled on her bottom, hips, stomach and legs. One guest lunged to kiss her, the Financial Times reported, and another invited her up to his room.

“Over the course of six hours, many of the hostesses were subjected to groping, lewd comments and repeated requests to join diners in bedrooms elsewhere in the Dorchester,” Marriage reported. “Hostesses reported men repeatedly putting hands up their skirts; one said an attendee had exposed his penis to her.”

WPP, the advertising giant, sponsored a table. The company’s chief executive, Sir Martin Sorrell, said that he and his guests did not witness any lewd behaviour.

1 ‘IRA has gone away’: McDonald responds to Garda Commissioner’s comments
2 Drug dealer loses codes for €53.6m bitcoin accounts
3 Courts Service gets orders over social media postings about elderly woman
4 More than 25 people to sue over circulation of images taken at Dublin Garda station
5 Varadkar says any Fine Gael deal would have to recognise strength of its vote
Real news has value SUBSCRIBE