Coronavirus: One-third of UK’s cases failed to share their contacts 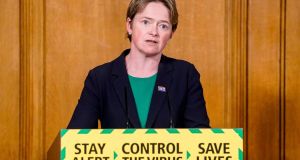 Dido Harding, who is in charge of contact tracing, said the service was not perfect but was fit for purpose. Photograph: Getty

One in three of those infected with coronavirus referred to contact tracers in England have failed to share details of people with whom they have had contact. Official data found that just 66 per cent of the 8,117 people who tested positive and were referred to tracers between May 28th and June 3rd provided details to tracers.

The remaining 33 per cent could not be contacted because information was incorrect or because they did not respond to calls or messages.

Dido Harding, the former telecoms executive in charge of the contact tracing operation, said the service was not perfect but was fit for purpose.

“We are not at the gold standard yet that we want to be, of isolating all contacts within 48 hours of someone requesting a test. But you can absolutely see the path of how we are going to get there. Just as the infection rate is coming down in the country, so is our capability to test and trace growing,” she told journalists.

“Is it completely perfect? No, of course it isn’t. Is there stuff that we all need to do better? Yes there is. But I think it’s fit for purpose as we stand today and will get better through the summer.”

Independent Sage, a group of scientific experts that has been critical of the government’s response to coronavirus, said the contact tracing operation’s performance was worse than it appeared.

David King, the former chief scientific adviser to the government who is the group’s chairman, said the 5,407 people who provided details of their contacts represented less than a quarter of an estimated 23,000 people who became infected with the virus during that period, according to figures from the Office for National Statistics .

“It is of course reasonable to expect that the first week of a new programme like this will have teething problems – however these figures are alarming. What is of particular concern is that we are continuing to see the country coming out of lockdown before a fit for purpose – let alone world beating – test, track and trace system is up and running,” said Sir David.

Health secretary Matt Hancock admitted that the contact tracing operation was not the “world beating” service the government had promised, but he said it was everyone’s civic duty to co-operate with it.

“It is brilliant that the vast majority of people have done their civic duty and as we have worked through our plan and as we keep driving this virus down, let us maintain that spirit and fortitude that has helped us throughout this pandemic,” he told a press conference in Downing Street.

“And that of course includes not attending large gatherings, including demonstrations of more than six people. I understand that people want to show their passion for a cause that they care deeply about. But this is a virus that thrives on social contact regardless of what your cause may be. So please, for the safety of your loved ones, stay alert, control the virus and save lives.”