EU sets out plans for advance orders of coronavirus vaccines 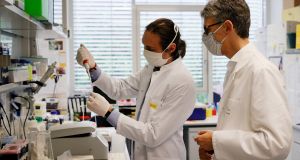 Staff at the Institute of Virology at the University in Marburg, Germany, where work on a Covid-19 vaccine is taking place. Photograph: Ronald Wittek/EPA

The European Union has laid out plans to place advance orders for coronavirus vaccines currently under development to ensure supplies for member states.

The bloc’s executive body has proposed that its 27 member states negotiate as a united bloc with pharmaceutical companies, and offer upfront financing to speed development and ensure priority access to any successful vaccine.

“We pay up front a significant part of the investment needed in exchange for a commitment from the pharmaceutical manufacturer to give us a vaccine when is available,” an EU official explained.

The first available doses will be distributed to member states according to the size of their population, according to the plans, and national governments will be in charge of which citizens get priority to be vaccinated first, for example starting with health workers.

Officials initially said Britain would not be included in the process. “We are very sad about it, but the UK decided to no longer be a member state,” the official said. “So they’re not part of this initiative.”

However, the commission later issued a correction to say that Britain had the right “in principle” to participate during its transition period, which is due to end on December 31st this year.

A vaccine is not expected to become available until 2021 at the earliest. If Britain wished to be part of the EU’s joint procurement of the vaccine, the details of how this would work would need to be figured out in discussions between London and Brussels.

“The UK can participate in the programme. We have issued a correction on this,” the commission’s chief spokesman Eric Mamer said.

The plan was presented to the health ministers of member states on Friday and received “overwhelming political support”, according to the commissioner for health Stella Kyriakides.

“A real game changer for our future without Covid-19 will be a vaccine. This will be the only real exit strategy from the crisis,” she told reporters. “Doing this together will be faster, easier, and cheaper for us all.”

The proposal will be put to national leaders next Friday for discussion, and must be approved to go forward.

The EU will ask companies to agree that vaccines will be made available to the whole world once its needs are met. Some 300 million shots will be required to vaccinate the bloc if the vaccine involves just one injection, and 600 million if it needs two doses.

Under the proposals, which must still be agreed by member states, the EU will invest in a selection of the most promising vaccines already in clinical trials this year. A range of companies are already trialling vaccines, including the British-based AstraZeneca and GlaxoSmithKline, France’s Sanofi, and the U.S. Pfizer, Novavax, Johnson & Johnson, and Moderna.

To speed up development, the EU plans to waive the usual requirement for environmental impact assessments for trials that involve genetically modified organisms, the official said.

It comes as the EU prepares to gradually remove restrictions on travel into the bloc.

The commission has advised member states that are part of the Schengen free movement area and the associated non-EU members of Iceland and Norway to open up travel between them by June 15th.

It has also called on the same countries to lift restrictions on travellers from outside the EU from July 1st, as long as the health situation in the country the arrivals are travelling from is deemed acceptable, and that infections are at a similar level as within the EU.

However, countries should consider including international students in their definition of essential travel to allow them to enter from abroad, even if they are coming from badly affected countries, the commission said.

“International travel is key for tourism and business, and for family and friends reconnecting,” commissioner for home affairs Ylva Johansson told a news conference following a meeting of interior ministers.

“While we will all have to remain careful, the time has come to make concrete preparations for lifting restrictions with countries whose health situation is similar to the EU’s and for resuming visa operations.”