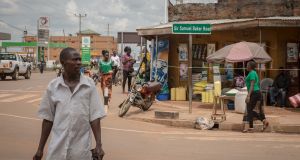 Sir Samuel Baker Road in Gulu, northern Uganda, is named after a British explorer who is said to have laid the foundations for colonialism. Photograph: Sally Hayden

As statues of slave traders are torn down across Europe and the US, thousands of people have signed a petition to have the names of streets and landmarks in Uganda renamed after local heroes, rather than British colonialists.

Locations targeted include those commemorating Henry Colville, Sir Fredrick Lugard, and Colonel Trevor Ternan, “who, as our history shows, were responsible for reprehensible crimes including pillage, rape and murder”.

“We believe that the removal of visible vestiges of a colonial hegemony from public spaces is a crucial part of a process of decolonisation,” reads the petition, which was set up by corporate lawyer Apollo Makubuya. “Events following the ugly killing of George Floyd in the USA demonstrate the urgency to address all forms of injustice and discrimination everywhere. It is time for us to come to terms with our history.”

The East African country of more than 42 million people was a British protectorate for decades, until gaining independence in 1962.

Speaking in a personal capacity on Thursday, Don Wanyama, a presidential spokesman, told The Irish Times he believed it was important to celebrate Ugandan heroes and that renaming streets may be the right move.

“But also, for some of the colonial extremists, there’s no better way to be reminded about their excesses than by letting landmarks named after them to exist,” he said. “What’s critical is to educate our people to know their history well. For example, the Congo should not erase everything associated with King Leopold, some must stay as a reminder of the harrowing past.”

In Gulu city, there is a Sir Samuel Baker road and school, named after the Victorian explorer who died in 1893 and is said to have laid the foundations for colonial rule in northern Uganda and southern Sudan.

Though Baker is lauded for opposing the slave trade, he also referred to Africans as “savages”, saying they were brutish and their nature was “not to be compared with the noble character of the dog”.

His eponymous street now houses a pentecostal church, as well as a rice and beans wholesaler. One section is crowded with goats for sale.

“If they want to change it do, but not because of the US,” opined Otim Julius (67), who was sitting by the roadside with friends. “What happened in the US doesn’t mean people need to be crazy here.”

Julius suggested the road be renamed after Ogwal Bwong, a former king from the Acholi tribe, which dominate northern Uganda. “There is nothing yet in [Bwong’s] name,” Julius explained, “only songs.”

“People are already used to these names,” said Molly Adong (30), who sells phone credit. Locals would still call it Sir Samuel Baker Road even after the name was changed, she said, though she would like to see it christened after former Ugandan president Idi Amin.

Baker is also responsible for naming Murchison Falls waterfall after Scottish geologist Roderick Murchison, and renaming Lake Albert, Africa’s seventh-largest lake, after Queen Victoria’s consort Prince Albert. Ugandans who spoke to The Irish Times questioned whether those destinations would need to have their names altered too, with one man commenting wryly, “we have smaller things to worry about”.

In Gulu, other British legacies have already been reclaimed. The colonial clubhouse is now an arts centre, while the residence of the British representative is a temporary home for surrendering rebel fighters.

Last year, Ugandan writer Milton Allimadi went viral online after posting a photo from London saying he was renaming the river Thames the “river Gulu”. “I don’t know what the natives call it but I gave it a proper name,” he wrote. “You can now call me Sir Milton. ”