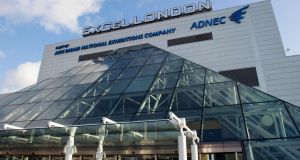 London’s ExCel centre is pictured in east London, which will be used as a 4,000-bed field hospital. Photograph: Leon Neal/AFP via Getty

The British army is helping to set up a 4,000-bed field hospital in London’s ExCel convention centre to treat people infected with coronavirus, as the government appealed for 250,000 volunteers to help the National Health Service (NHS).

Britain’s death toll from the virus has risen by 87 to 422, after the country recorded its highest number of deaths in a single day.

On the first day of a lockdown ordered by prime minister Boris Johnson, workers in some sectors remained uncertain about whether they had to go to work if their employers demanded it. Health secretary Matt Hancock said people should work from home if possible but that if not, they should go to work as normal.

“The judgment we have made is that in work in many, many instances, the two-metre rule can be applied. In my workplace in the House of Commons you can see it every day. And where possible, people should work from home and employers have a duty to ensure that people are more than two metres apart,” he said.

But Labour’s shadow health secretary Jonathan Ashworth said only key workers whose jobs were considered essential should be obliged to work outside their homes.

“This is putting workers at risk and it’s putting the lives of all of us at risk. We need clear enforcement.”

Mr Hancock said the NHS Nightingale Hospital, which will have two wards with 2,000 beds in each, would open in the Excel centre in London’s Docklands next week.

“With the help of the military and the will of NHS clinicians we will make sure that we have the capacity we need to make sure everyone can get the support they need. No matter how big we grow the NHS unless we slow the spread of this virus then as we have seen the numbers will continue to rise. That’s why it’s so important that everyone follows advice,” he said.

The health secretary was speaking at a press conference in Downing Street with no journalists physically present, answering questions posed remotely.

The new volunteer scheme hopes to recruit a quarter of a million people to deliver food and medicine to people who are self-isolating, to transport patients and move goods around for the NHS, and to stay in touch by phone with people who are feeling lonely in self-isolation.

The new restrictions on movement mean that people are not to visit anyone outside their own household and to remain two metres apart from anyone not in their household they meet outdoors. Deputy chief medical officer Jenny Harries said people with girlfriends or boyfriends they do not live with should not move between two households.

“The alternative might be that for quite a significant period going forward they should test the strength of their relationship and decide if one wants to be a permanent resident of another household. The issue here is what we do not want is people switching in and out of households. It defeats the purpose in the reduction of social interaction. Otherwise we will not all be working towards achieving the outcome,” she said.