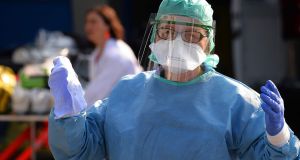 Business groups reacted positively to new public restrictions and the closure of all but essential services to stem the spread of coronavirus, but urged the Government to keep warning the public of safe distancing measures.

Affected restaurants which could not offer a takeaway service following the new wave of business closures were encouraged to speak to their insurers to see what supports were available.

The Government announced the closure of non-essential retail services and businesses such as gyms, leisure centres, hairdressers, betting offices, caravan parks, casinos and bingo halls in an effort to limit further contacts between people to prevent infections with Covid-19.

Taoiseach Leo Varadkar said the country’s private hospitals are to become part of the public hospital system for the duration of the Covid-19 emergency.

The Private Hospital Association, which represents 19 hospitals, covering 2,000 hospital beds and 8,000 staff, said discussions were “continuing on arrangements to allow the State to contract, for a temporary period, the country’s private hospital bed capacity”.

The association said it “fully supports all strategic measures currently under consideration aimed at combating this pandemic and that it saw that the temporary use of private hospitals was “a critical next step in managing the Covid-19 pandemic”.

“The precise detail of the HSE plan is still being discussed and we would hope to finalise this in the coming days,” said a spokesman for the association.

Cafes and restaurants have been ordered to limit supply to takeaway services only.

“From a staff and customer welfare point of view, this is the right decision; it should have been done the weekend before last,” said Adrian Cummins, chief executive of the Restaurants Association of Ireland, who has been repeatedly warning about the risks to restaurant staff.

The closures would have a “major effect” on the vast majority of restaurants in the country and have long-term implications for businesses into the future.

He welcomed the exemption from planning permission for restaurants to operate takeaway services in the emergency legislation being proposed by Government later this week. However, he warned that many restaurants would not be able to provide such services.

“If you are a Michelin-starred restaurant, you won’t be doing that,” said Mr Cummins.

He encouraged all restaurants to speak to their insurance companies about the closures with regard to potential claims under business disruption insurance.

The restaurant group welcomed the Government’s decision to increase the unemployment support payment to people laid off due to the outbreak to €350 from €203, but said small businesses may not have the cash flow to meet the 70 per cent top-up of workers’ salary to €410 a week.

“Small businesses must not be penalised due to cash flow difficulties,” the group said.

Taoiseach Leo Varadkar said other retail outlets could remain open so long as they could ensure adequate physical distancing between customers to prevent the spread of infection.

“Obviously, they would like the Government to keep reminding people about physical distancing so that people understand what it is and why they are doing it,” she said.

The Irish Hairdressers Federation welcomed the forced closure of all hairdressers to protect the safety of their almost 400 members because 90 to 95 per cent of salons had already closed and it felt that they had commercially been “pushed into a corner” by those who decided to remain open.

“We are happy for everyone to have to close their doors and not have those risk-takers deciding to stay open and to put the health of their staff at risk,” said Vicky Burke, the federation’s secretary. “Obviously it is negative but everyone is in the same boat at this moment in time.”

Business and industry group Ibec, the country’s largest employer representative body, said the measures were affecting businesses largely engaging with the public, and that industry and manufacturing groups would be unaffected as they were considered essential.

“We are very supportive of the new social distancing. This is the right thing to do,” said Fergal O’Brien, director of policy and public affairs at Ibec.

The continuation of manufacturing was essential for the supply of food, medicines and medical devices and pharmaceutical, given the interdependence of supply chains beyond Ireland, he said.

“Industry will, by and large, be continuing, not just as a supply chain for the Irish, but feeding populations and providing med-tech and pharma around the world,” said Mr O’Brien.

Ibec said the Government’s temporary wage subsidy scheme and continued operation of essential businesses would “play a crucial role in enabling the economy to bounce back at the other end of this Covid-19 crisis”.

The measure would help in “keeping vulnerable firms alive, keeping their employees engaged with them and protecting the income of individuals”, said Ibec chief executive Danny McCoy.

The Government “must do everything possible to prevent a deep demand shock and do everything to allow the economy recover at the end of this crisis,” he said.