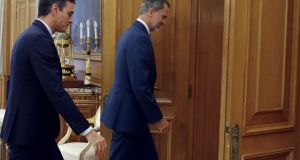 Spain will hold a fourth general election in four years after the country’s political parties failed to end a months-long standoff.

Socialist leader Pedro Sánchez has been unable to win the parliamentary support that would have allowed him to form a government by September 23rd, the deadline for the triggering of a new election.

Having consulted political leaders on Monday and Tuesday, King Felipe chose not to invite Mr Sánchez to face an investiture vote. In a statement, the royal household said that “there is no candidate who can count on the necessary support” to form a government.

Mr Sánchez, who is acting prime minister, won an April general election but fell short of a majority. He then lost a July investiture vote having not managed to win the support of the leftist Podemos.

The two parties have been unable to agree on a governing formula, with Podemos wanting to be part of a formal coalition whereas Mr Sánchez preferred a confidence-and-supply agreement.

“Spain has had five years of deep instability,” said Mr Sánchez in a press conference shortly after the royal statement, in which he blamed the other parties for the new elections.

“We have accepted our electoral result [but] have the other political forces?” he said.

The election will be held on November 10th and polls suggest that the Socialists could improve on their 123 seats. However, they would be unlikely to secure the 176 or more needed to govern without the support of other parties, meaning further negotiations are likely to be needed to form a new administration.

“We suspect that Pedro Sánchez did not want to form a government,” said Pablo Casado, leader of the conservative Popular Party (PP). “What he wanted was elections.”

On Monday, remote hopes that Mr Sánchez might get the support he needed were raised when the Ciudadanos party offered to abstain in an investiture vote in exchange for a set of pledges from the acting prime minister.

Among them, Ciudadanos leader Albert Rivera called on Mr Sánchez not to pardon Catalan independence leaders who are awaiting sentencing and to avoid tax raises.

But Mr Sánchez’s response, in which he said he was unable to anticipate a judicial decision on the Catalan case and that he aimed to increase equality for Spaniards, did not satisfy Ciudadanos.

On Tuesday, Mr Rivera criticised the Socialist party leader. “We’re in an exceptional situation,” he said. “We’re at the limit of extra time because Sánchez has wasted six months.”