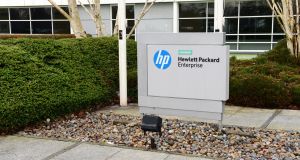 HPE employs almost 700 people in Ireland, including at its offices in Kildare, pictured above, Dublin and Galway. Photograph: Dara Mac Dónaill/The Irish Times

Hewlett Packard Enterprise is set to appoint a new managing director for Ireland as the company grows its business.

This is the first time the organisation will have an executive focused solely on Ireland since Martin Murphy left the role in 2016, almost a year after the company was formed following the split from HP Inc. The position, which has already been announced to employees, will be appointed by November 1st and the recruitment process is already underway.

The new hire will report directly to Marc Waters, HPE’s managing director for the UK, Ireland, the Middle East and Africa, who has had overall responsibility for the business on the island of Ireland.

“It has been a very good year for the Irish business,” Mr Waters said, saying the company had experienced double-digit growth. “Given the growth opportunity we see in Ireland and the progress that the businesses have made this year, we are going to make the investment and have that single leaser based in Ireland to tell our story.”

Mr Waters said the company was also looking at internal candidates to fill the role. HPE employs almost 700 people in Ireland, including at its offices in Kildare, Dublin and Galway.

Mr Waters said the business was preparing for the upcoming exit of the UK from the European Union and had been doing so for about 18 months. to ensure as little disruption to customers as possible. He said more uncertainty and extensions were “not necessarily welcome”.

“We believe we can continue through whichever flavour of Brexit we get without disrupting our customers,” he said, adding that the company had invested a lot in being as prepared as possible for any impact on its internal systems and processes, such as supply chains, invociing requirements and compliance.