Chris O’Dowd: ‘The idea that the British government won’t f*** us over is laughable’ 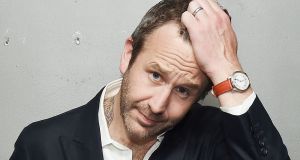 Chris O’Dowd: ‘It seems oddly fitting to the people of Ireland that Brexit is coming down to the backstop.’ Photograph: Nicholas Hunt/Getty

“There are very few alpha males,” Chris O’Dowd whispers, “but plenty of delta males. They’re not very masculine, they’re slightly ageing and they have lots of feelings of inadequacy. Delta males: it’s a term that’s very relevant to a lot of people in my life.”

In State of the Union the 39-year-old star of Bridesmaids, The IT Crowd and, before those, the RTÉ series The Clinic, plays just such a character. Tom is a London-based Irish music critic made redundant by the rise of social media. His last active engagement with the world was to get British citizenship in order to vote for Brexit and thereby annoy his wife’s Guardian-reading remoaner friends.

His wife, Louise, played by Rosamund Pike, has his number. “You were out long before Brexit,” she says. “Friends – out. Marriage – out. Life – out.” He has withdrawn from everything – including, saddest of all, from sex – crashing out with no deal into unsplendid isolation.

British history books don’t really dwell on the depraved way Britain has treated its closest neighbour. What do I think will happen? Irish prosperity and peace are going to be completely usurped by Westminster. Again

About to air on BBC Two, this unexpectedly funny, sweet and touching Emmy-nominated series, written by Nick Hornby and directed by Stephen Frears, takes place over 10 weeks, each 10-minute episode unfolding in a pub in Hammersmith, in west London, as the pair steel themselves for weekly couples counselling. They’ve started therapy because Louise had a brief, regretted affair. “In an ideal world,” she tells Tom, “I’d only want to have sex with you.” But this isn’t an ideal world. At night, instead of making love, he scorns her choice of bedtime reading: “How many Scandinavian women are there left to kill?”

Tom is a man in arrested development, a theme Hornby has been writing about for decades in books that became films: the obsessed Arsenal fan of Fever Pitch, played by Colin Firth; the list-making record-shop geek of High Fidelity, played by John Cusack; the kidult of About a Boy, played by Hugh Grant.

But, most of all, Tom is a reworking of the role O’Dowd played last year in the film Juliet, Naked. His Duncan was a professor of television studies who microanalysed The Wire for a living and was besotted with the lame oeuvre of a 1990s indie-rock star played by Ethan Hawke. No wonder his long-term girlfriend, portrayed by Rose Byrne, was so bored with their relationship.

Although O’Dowd was funny, some felt the character he played was cartoonish and his predicament too fanciful to be believed. State of the Union is much more nuanced. Tom’s no cipher and Louise is as culpable as he is for their problems. You probably know a couple like them. You may even be them.

“I mean, she’s Rosamund Pike, so she could clearly do better,” O’Dowd says self-deprecatingly, speaking by phone from California. “But could she be bothered?” Actually, what’s more likely is that Louise wants to rebuild a connection with the man with she loved and whose conversation she enjoys: their dialogue sparkles throughout, even as it expresses all their pain and resentment. “I think that’s right. These guys are better together.”

Who will watch State of the Union? “Anybody who’s ever been in a relationship,” says O’Dowd, who was born in Co Roscommon but has lived in Los Angeles for 10 years. “The interesting thing about it being short-form comedy is that one of the biggest audiences will be commuters. It’s just the thing to watch on your phone for 10 minutes.”

If Hornby’s males are often boys trapped in men’s bodies, his women are rarely so confined. Byrne played a museum curator, Pike is an NHS gerontologist (someone who studies ageing). In Hornbyland, women do grown-up jobs while the men remain disappointing scions of the patriarchy, piggybacking on their spouses emotionally and, in State of the Union, financially.

O’Dowd believes that women aren’t the only losers in a patriarchal society. “I feel a lot of men haven’t benefited either. I know that men have coasted too long in power – but come on! Having to be aggressive? Despising showing your feelings? All that’s hopeless.” Men will benefit from the #MeToo movement, he says. “To be elevated above our protective side is going to be really good for men. Equality is going to be great for everybody.”

Charm itself, O’Dowd gets cross only once in our interview. With many Britons trying to find enough Irish ancestry to qualify for a passport with a harp on it, Tom may well be the only Irish person who opted to become British to back Brexit. Is he like Tom in that respect? The line goes rather quiet.

“It seems oddly fitting to the people of Ireland,” he says finally, “that Brexit is coming down to the backstop. The suggestion that the British government is making – that they won’t f*** us over – is laughable. That’s what they have done for 800 years. People growing up in Britain won’t have much sense of that. Their history books don’t really dwell on the depraved way Britain has treated its closest neighbour. What do I think will happen? Irish prosperity and peace are going to be completely usurped by Westminster. Again.”

Otherwise O’Dowd is very much like Tom, a delta male struggling towards middle age. “I’m turning 40 very soon. I was thinking the other day, I’ll be middle-aged! And then I thought, I’ve felt middle-aged for a while.” This year, he says, has been all about taking stock of his life: “What do I want to do with the rest of it?”

He loved playing the sad-eyed basement geek Roy in The IT Crowd, with his catchphrase: “Have you tried turning it off and on again?” And he got a Hollywood break as the sweet cop who puts out for troubled Kristen Wiig in the 2011 film Bridesmaids. He now has a regular turn in the TV adaptation of Elmore Leonard’s Get Shorty, as a mob muscle aspiring to become a movie producer. We will next see him alongside Melissa McCarthy in The Starling, the two playing a couple who have lost a child in what is billed as comedy drama.

Although he has thrived in LA, O’Dowd is prone to misgivings. “It’s easy just to follow the work and not think too hard about where you’re going.” He never had huge expectations of his career but is keen to have “a bit more creative control and more time at home”. He hopes to write again following the success of his book Moone Boy: The Blunder Years, a spin-off from the Sky series of the same name, based on his childhood and filmed in his home town of Boyle.

When O’Dowd married the TV presenter and writer Dawn Porter, in 2012, she changed her surname to O’Porter. They have two sons, Art and Valentine. He recently tweeted something that Tom could do with taking on board: “Marriage can be tricky and parenting is no walk in the park. What makes both easier is doing them with the best person you know. Happy anniversary my love.”

O’Dowd is the youngest of five siblings. His dad, Seán, is a sign designer, his mum, Denise, a psychotherapist. What did she make of State of the Union? “She really enjoyed it – she saw a lot of very familiar troubles dramatised in it.” Not least the fact that it’s generally the man who is most sceptical about therapy. Upset that their shrink is a woman, Tom says to his wife: “Why do we have to do all our dirty washing in her launderette?” The shrink’s gender will, he says, make one thing inevitable: “I’m going to get slaughtered.” Why? “Because of feminism.”

By the end of the first season Tom and Louise may have worked out some of their problems, but I suspect there’s still more than enough material for a second season. “Maybe,” O’Dowd says. “They both need to be stripped of their illusions if they’re going to have a future together. She wants their marriage to be constant rapture. Maybe this idea that marriage is nothing but a joyous experience is nonsensical. I certainly think it is. The truth is that it’s okay to be unhappy.”

Mary Trump: How my family created the world’s most dangerous man
6

Michaela Coel on sexual assault: My friends’ stories made me realise I was far from alone
7

Tom Hanks on Covid-19: ‘I had crippling body aches, was fatigued all the time and couldn’t concentrate’
9 Welcome to the child sex capital of Europe
10