Corbyn to accuse Johnson of attempting to hijack Brexit 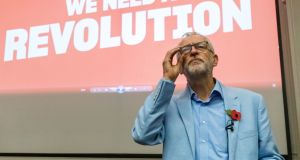 Jeremy Corbyn will say on Tuesday that the prime minister seeks to reduce employment, environmental and consumer standards in a programme of ‘Thatcherism on steroids’. Photograph: Vickie Flores/EPA

Jeremy Corbyn will on Tuesday accuse Boris Johnson of attempting to hijack Brexit to reduce employment, environmental and consumer standards in a programme of “Thatcherism on steroids”.

The Labour leader will claim that, instead of putting an extra £350 million a week into the National Health Service as Vote Leave promised in 2016, the prime minister’s real agenda was to put the NHS on the table in a post-Brexit trade deal with Donald Trump.

“Given the chance, they’ll run down our rights at work, our entitlements to holidays, breaks and leave. Given the chance, they’ll slash food standards to US levels where ‘acceptable levels’ of rat hairs in paprika and maggots in orange juice are allowed and they’ll put chlorinated chicken on our supermarket shelves,” Mr Corbyn will say in a speech in Harlow, a marginal seat Labour hopes to win from the Conservatives in next month’s general election.

“What Boris Johnson’s Conservatives want is to hijack Brexit to unleash Thatcherism on steroids. Margaret Thatcher’s attack on the working people of our country left scars that have never healed and communities that have never recovered. The Conservatives know they can’t win support for what they’re planning to do in the name of Thatcherism. So they’re trying to do it under the banner of Brexit instead.”

Echoing the prime minister’s promise to “get Brexit done”, the Labour leader will pledge to “get Brexit sorted” within six months and give voters another chance to decide if they want to leave the European Union. Labour would negotiate a new Brexit deal based on remaining in a customs union with the EU and “a close relationship” with the single market and give voters a choice between that deal and remaining in the EU.

The House of Commons on Monday night chose Lindsay Hoyle to be its 158th speaker, succeeding John Bercow. Mr Hoyle was elected after four rounds of voting by MPs in a secret ballot, defeating fellow Labour MP Chris Bryant by 325 votes to 213.

After he was dragged to the speaker’s chair in accordance with tradition, Mr Hoyle told MPs that the House of Commons would change under his chairmanship, but for the better.

“I stand by what I said, I stand firm, that I hope this House will be once a great respected House, not just in here but across the world. It’s the envy and we’ve got to make sure that tarnish is polished away, that the respect and tolerance that we expect from everyone who works in here will be shown and we’ll keep that in order,” he said.