‘A permanent state of schizophrenia’: growing up in East Germany 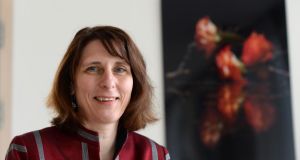 For Germany’s ambassador to Ireland, Deike Potzel, the memory of 30 years ago when the Berlin Wall fell is a surge of joy followed by a stab of fear.

Potzel is the first woman and the first easterner to serve as Germany’s head diplomat in Dublin. She is also one of Germany’s in-between generation: old enough to remember the realities of her vanished socialist homeland yet, aged 21 in 1989, young enough to grab the fresh opportunities offered by unification.

A Berlin native, she’s back in the German capital for the weekend, and we’ve arranged to go for a walk through her past. We meet on Alexanderplatz under East Berlin’s equivalent of Clerys clock: the modernist Weltzeituhr (World Clock).

It was unveiled in 1969, and is a massive, complicated construction of spinning planets showing the time in 148 cities in 24 time zones – most of which Potzel couldn’t visit growing up on her side of cold war Europe’s iron curtain.

Superficially, she had a comfortable childhood: school, shops, theatres, cinemas and concerts. Inside the adjacent train station, where the toilets are today, used to be her dance troupe’s rehearsal rooms.

Beneath the East German surface, though, her regime-critical parents drilled into her how loose talk could have consequences. In a state like East Germany, permeated with Stasi secret police informers, Potzel describes her childhood as a “permanent state of schizophrenia”.

“You learned from the start that you can’t say this here and that there – it was a huge burden,” she recalls. “Your level of privilege depended on how much you committed to the system. That was completely at odds with my personal sense of justice.”

We’ve passed Alexanderplatz and are walking through a scrappy streetscape of pre- and post-1989 buildings. The world clock and the nearby TV tower remain as untouchable, socialist design icons. Hidden in a scruffy copse of trees, we discover less popular markers: the statues of Marx and Lenin.

That triggers memories in Potzel of reeling off the dry communist doctrine needed to get ahead in the socialist state. A vanished hotel reminds her of a holiday fling with a West German youth, thwarted by the Stasi.

Ahead of us is the new Humboldt Forum, a recreation of the old Prussian Palace, blown up in 1950 and replaced by the East German “Palace of the Republic”, a parliament and recreation complex. It was demolished, as was, behind it, the East Berlin foreign ministry. The post-1989 rule for the streetscape here seems to be: East German design = good, East German politics = bad.

“The east is all gone there,” she nods, thoughtfully.

As with many former East Germans, Saturday’s looming anniversary brings back mixed memories for Potzel. She crossed over late on the night the wall came down and found a phone box on West Berlin’s Kurfürstendamm boulevard for an emotional phone call to her father, back home in the east.

That buzz evaporated back home at dawn, however, when she noticed an “Ausreise” exit stamp on her ID. Gripped by panic, she tried to remove the ink with lemon juice and stain remover – but she succeeded only in rubbing a hole in the ID card. In desperation, she tipped a bottle of ink over it as an excuse for a new card.

What was she afraid of?

“That they’d check the IDs, they’d see I’d been in the West, I’d lose my university place, that I’d disappear into a prison or a camp,” she says.

That latent fear – of authoritarian, arbitrary authorities – was a more effective means of control in East Germany than the Berlin Wall or the ruling SED party’s “sword and shield”: the Stasi secret police.

Sitting now by the Spree riverbank, sipping beer, her husband, Markus, agrees. Easterners kept themselves in line through a permanent state of low-level anxiety over potential consequences of one’s actions.

“There was real fear, too, of Sipenhaft – clan liability,” says Markus, also a German diplomat. “If you disappeared into the west, your family would face the consequences.”

Both studied at Berlin’s Humboldt University and have been a couple since 1990 – something for which they can thank the fall of the wall. Unlike her regime-critical family, his parents worked for East German television. “My parents fully believed in the system and supported it to the end. I did too,” he says.

Dating someone with a true believer mindset, Deike says, would have been out of the question before November 9th, 1989. From an early age she decided to keep her distance from the state.

But even her life, she concedes with 30 years’ distance, was marked by a lower level of conformity. Like the vast majority of easterners, she wasn’t involved closely in the 1980s reform movement that toppled the wall. After attending one such meeting, her father warned her of the consequences for the family, and not to be a “martyr” to the cause of political reform.

Instead her East German life, like millions of others’, sounds like an exhausting permanent negotiation between internal, individual convictions and an external collective regime that could make or break you.

“You want to use your potential, I wasn’t stupid and found it only right I could study at university,” says Deike Potzel. “But I had my limits: I wouldn’t have joined the SED or the Stasi.”

Even after a Bulgarian summer holiday in 1989, when she was tempted to head for Hungary and escape to the west, she returned to her life and family in East Berlin. A month later her heart sank when East German head Erich Honecker said the country “won’t shed a single tear” for those who had fled.

The Potzels were young, educated and privileged enough to seize the opportunities and start again in the diplomatic service of the united Germany. Others have had less success, or feel their life achievements were dismissed in the new Germany.

Before we part company, she points out how some western German friends still struggle to grasp easterners’ journey since 1989, guided by different cultural and historical reference points.

“We are different,” she says And that difference has, ultimately, enriched the German unification process of the last 30 years. “Of course mistakes were made. We never united two countries before, and hopefully we won’t have to do it again.”