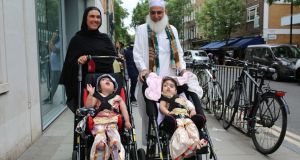 Two-year-olds Safa and Marwa Ullah, from Charsadda in Pakistan, leaving hospital after a surgery to separate their heads at the hospital in London, with their mother Zainab Bibi and their grandfather Mohammad Sadat. Photograph: Great Ormond Street Hospital/PA

It took more than 50 hours of surgery to separate conjoined twin sisters at a London children’s hospital.

The BBC followed the story of Safa and Marwa Ullah through a series of operations over a five-month period, starting in October when they were 19 months old.

They said the surgeons first had to study the girls’ brains, and then spent months preparing for the complex surgery.

They then had to remove three large segments of skull, which they would later reattach between operations as a rigid frame held together by metal mesh and screws.

Next, the surgeons had to clamp and seal the arteries which carried blood from one twin to the other, before using a soft sheet of medical plastic to keep the once-joined brains separate and prevent them from reconnecting.

Tissue expanders — four empty plastic sacs placed underneath the skin which were then filled with saline — were used to stretch the skin before the girls were finally separated.

Their partially exposed heads were wrapped in plastic film before they could be safely moved to separate operating theatres for the final stages of the procedure.

Final reconstruction was done using the twins’ own bone, fragments of which were “jigsawed”, the BBC said, over their heads, and eventually covered with the expanded skin.

Great Ormond Street Hospital has previously successfully separated craniopagus twins — with their skulls and blood vessels fused together like Safa and Marwa - in 2006 and 2011.–PA