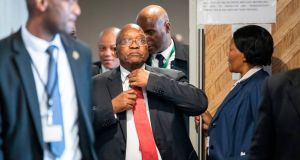 Former South African president Jacob Zuma arrives at the Commission of Inquiry into State Capture on Monday in Johannesburg. ‘I have been vilified, alleged to be the king of corrupt people.’ Photograph: Wikus de Wet/AFP/Getty Images

Appearing before the Commission of Inquiry into Allegations of State Capture, Corruption and Fraud in the Public Sector in Johannesburg on Monday, Mr Zuma claimed the plot against him stretched back to the early 1990s and involved three security agencies.

Without naming the agencies involved, Mr Zuma said he received a report in 1990 that indicated intelligence bureaus from two “big” foreign countries and one from South Africa had met to hatch a plan to assassinate his character.

“There has been a drive to remove me from the scene, a wish that I should disappear,” he told the inquiry at the beginning of his testimony, “and it arises perhaps out of my work in the ANC [African National Congress] and also because of who I am.”

Mr Zuma was making his first appearance in the witness stand at an inquiry that a year ago began to investigate if South Africa’s controversial Gupta business family had had undue influence over him during his nine-year presidency.

Since it began hearing evidence last August, whistleblowers appearing at the inquiry have accused Mr Zuma – and senior members of his government – of bribery, facilitating tender fraud, and using his influence as president to bypass official regulations.

I thought I should brighten up your day pic.twitter.com/T9kJgBUZz8

The Gupta brothers Ajay, Atul, Rajesh and their associates, as well as logistics company Bosasa and its chief executive Gavin Watson, are accused of being the main private sector beneficiaries of the corrupt activities that have been outlined so far. They all deny any wrongdoing.

“I have been vilified, alleged to be the king of corrupt people,” Mr Zuma told the inquiry, which is led by deputy chief justice Raymond Zondo, before adding that he was also being marginalised by his former comrades in the ruling ANC.

Hundreds of Mr Zuma’s loyalists from his home province of KwaZulu-Natal (KZN) attended the inquiry on Monday to support the former president as he detailed the alleged conspiracy behind the many corruption scandals he has been embroiled in over the years.

Mr Zuma linked the arms deal corruption charges he is due to face later this year and the scandal around the upgrades made to his rural home in KZN with taxpayers’ money to the conspiracy, maintaining they were both part of a “huge plan” to bring him down.

He went on to say that over the years the plot had also involved a number of attempts to have him assassinated, and it involved senior ruling party members who had become spies for the intelligence agencies.

Mr Zuma (77), South Africa’s president from 2009 to February 2018, when he was removed from office by the ruling party, even linked the inquiry he was appearing at to the plan to remove him from power, saying it was designed “to be the grave of Zuma. He must be buried here.”

He confirmed that he knew the Gupta brothers, whom he said he was introduced to when he was the country’s deputy president in the early 2000s.

However, he insisted there was nothing untoward about their relationship and that they were just “friends”.

He confirmed that he advised the Guptas to establish the newspaper the New Age and news channel ANN7, as he felt there was a need for an “alternative voice” in the media industry, which he believed was too negative.

The Gupta brothers left South Africa shortly after Mr Zuma was removed from office and they are now thought to be living in Dubai.

Mr Zuma is scheduled to continue his testimony for the rest of this week.

1 Passenger who promised driver a ‘few quid’ after crash awarded €10,000
2 Miriam Lord: Minister for Agriculture tries to get himself out of the manure
3 Driver whose car ‘rolled nine metres’ into front of other vehicle loses rear-ending claim
4 Barry Cowen tells Dáil he is profoundly sorry for ‘stupid’ drink driving offence
5 Coronavirus: One more death and 24 new cases reported in the Republic
Real news has value SUBSCRIBE