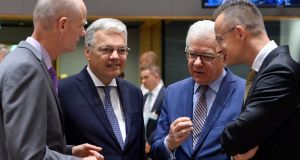 EU foreign ministers have warned Iran again that if it wants to keep its nuclear deal intact it must comply fully with the enrichment limits set out in the deal known as the Joint Comprehensive Plan of Action (JCPOA).

In a joint response to confirmation by the International Atomic Energy Agency (IAEA) that Iran is now in breach of enrichment limits, the foreign ministers of France, Germany and the United Kingdom, as well as the EU high representative for foreign policy, Federica Mogherini, and all parties with Russia and China to the agreement, issued a strong warning to Tehran on Sunday.

On Monday, EU foreign ministers, determined to see the JCPOA survive and convinced that it still can despite US repudiation, echoed their “deep concern” and also urged Iran to reverse course. Ireland is understood to have been fully in support.

Over the past 10 days, Tehran has twice breached the terms of the landmark accord with six world powers which sought to extend the time Iran would need to make an atomic bomb.

After US president Donald Trump last year abandoned US participation in the JCPOA and reimposed sanctions on the Islamic Republic, Iran raised the limits on uranium enrichment.

Iran’s leaders are angry that its beleaguered economy is not benefiting from the sanctions relief it was promised in the 2015 accord, under which Iran agreed to curbs on its nuclear activities in return for an easing of sanctions.

Arriving for Monday’s meeting, ministers spoke of the need to find ways to preserve the JCPOA. France’s foreign minister, Jean-Yves Le Drian, said Iran’s decision to break processing and storage limits in the agreement was a bad one “in response to a bad decision by the US to withdraw from the agreement”.

The EU had agreed with the US on the long-term solution, in getting Iran to desist from its nuclear programme and its destabilising activities in Iraq and Yemen, British foreign secretary Jeremy Hunt said, but not on how to get there. “Friends sometimes disagree,” he said of the US repudiation of the JCPOA, “but we work closely together in pursuit of peace.”

Ministers also backed new sanctions against Turkey over its illegal oil drilling off the coast of Cyprus.

They agreed to suspend ongoing talks with Ankara on a Comprehensive Air Transport Agreement and cancelled further high-level meetings. For a second time the EU will also cut back financial support, by some €145.8 million, more than a third of the 2020 funding designed to be used for reforms Turkey needs to undertake as part of its accession track.

The European Investment Bank will be asked to review its lending activities in Turkey, “notably with regard to sovereign-backed lending”.

The measures were backed by Minister for Foreign Affairs Simon Coveney, who is said to be particularly concerned that Ireland should be seen to be expressing its support for a small state under pressure.

In 2017, the EU cut €175 million from Turkey’s 2018 pre-accession funding due to a sharp deterioration in the rule of law and democratic standards. And the European Commission and the EU’s high representative for foreign affairs are asked “to continue work on options for targeted measures in light of Turkey’s continued drilling activities”.

Cyprus insists that Turkey’s drilling operations are contrary to international law and that decisions on hydrocarbons are its sovereign right, while Turkey says Greek Cypriot authorities can’t decide for the whole island and that waters around Cyprus lie on its own continental shelf.

Cyprus has issued arrest warrants for the crew of one of two ships that is now drilling 68km off the island’s west coast.

Aware that Monday was the third anniversary of the attempted coup in Turkey, ministers were anxious not to be seen to rub salt in Ankara’s wound and delayed announcing the sanctions.