The fall of the House of Hohenzollern 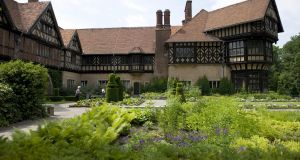 Cecilienhof Palace in Potsdam in northeastern Germany. The heirs of the former Prussian monarchy are seeking the return of artworks and the right of residence in various properties. Photograph: Barbara Sax/AFP

Cecilienhof is where, in 1945, the victorious allies set down the terms for post-war European order and set in motion events that led to the cold war.

A mock-Tudor pile in Potsdam, outside Berlin, Cecilienhof was completed in 1917 as the last royal residence built for the family of Kaiser Wilhelm II before he went into exile a year later.

Now, a century on, his family wants it back. And the Hohenzollern family want key items that once were part of imperial Germany’s crown jewels.

Georg Friedrich Prince of Prussia, the 43-year-old head of the House of Hohenzollern, has filed a claim with the German state demanding a permanent right of residency for his family in Cecilienhof, now a museum, or one of two other palaces formerly occupied by his family.

Among the most contested treasures it wants back: the family library

After five years of discreet talks, negotiators have reached an impasse. Now documents from the process have leaked revealing a bad-tempered row that threatens to break up Germany’s cultural legacy. The row has also dragged into the spotlight a family that prefers to live discreetly in the country it once ruled.

Georg Friedrich, the 43-year-old great-great-grandson of Kaiser Wilhelm, has cancelled long-term loans of family artworks in Berlin and Potsdam and demanded the handover of the family library and 1,000 letters to and from Auguste Victoria, the last empress.

The letters, many unopened, were discovered during a recent renovation of the former royal residence, the New Palace in Potsdam.

After imperial Germany lost the first World War in 1918, Wilhelm abdicated and settled in the Netherlands where he died in 1941.

Starting point for the current legal battle is a 1926 agreement signed between the Hohenzollerns and authorities in Berlin allowing the state retain 75 properties while handing back the Hohenzollerns 39, including Monbijou Palace in central Berlin.

This was a state-financed Hohenzollern museum – filled with family-owned exhibits on loan – until it was damaged in the second World War.

Monbijou Palace was torn down by the East German government in 1959, similar to Berlin’s nearby city palace a decade earlier.

The Hohenzollern family believes it was never compensated adequately for the loss of this and other properties on East German soil, let alone about 3,000 items they contained.

Undeterred by official resistance, the House of Hohenzollern continues to fight

Among the most contested treasures it wants back: the family library, 266 paintings and an imperial crown and sceptre currently on display in Berlin’s Charlottenburg Palace.

Five years of discreet mediation appears to have collapsed last February in failure when the House of Hohenzollern filed a list of demands with the federal culture secretary, Monika Grütters.

Having previously cancelled long-term loans with museums in Berlin and Potsdam, the family insisted on a “permanent, gratis, land registry-secured right of residence” in Cecilienhof or two other former royal properties in Potsdam.

Last month, Ms Grütters wrote a polite reply saying she saw “no suitable basis for negotiations with promise of success”.

Her lawyers insist there is no legal basis for the claims and officials have little appetite in dealing with the Hohenzollern family, given some members’ support for Hitler.

Curators, meanwhile, warn that transferring items to the Hohenzollerns could see them lost forever, pointing to the 2012 auction of the 35-carat Beau Sancy diamond for €7.4 million.

Undeterred by official resistance, the House of Hohenzollern continues to fight, its lawyer telling Berlin’s Tagesspiegel newspaper, “The talks are going well.”

The House of Hohenzollern rose to power in Brandenburg in 1415, extending its reach to the Kingdom of Prussia three centuries later and as ruling monarch in a unified Germany from 1871. Wilhelm, who became Kaiser in 1888, was a grandson of Britain’s Queen Victoria. His wife, Auguste Victoria, was also his second cousin because her maternal grandmother was a half-sister of Queen Victoria.

Georg Friedrich Prince of Prussia, the great-great grandson of the last kaiser, works as a lawyer and keeps a low profile in Germany. In 2014 he said it was “not relevant at the moment” to consider a return of the German monarchy.

“If the facts change,” he told The Irish Times, “I am a free person who can adjust to anything.”