Analysis: The former South African president’s nervousness during the commission inquiry is at odds with his earlier easiness 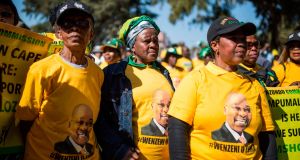 Supporters of former South African president Jacob Zuma gather outside the Hill on Empire building in Johannesburg, where Zuma appears before the Commission of Inquiry into State Capture over allegations that he oversaw systematic looting of state funds while in power. Photograph: Guillem Sartorio/AFP/Getty Images

Jacob Zuma’s main tactic during his first appearance at an inquiry into public sector corruption he is accused of being at the centre of was to cast himself as its main victim.

The former South African president said allegations that he helped the Gupta business family to illegally acquire government tenders was part of a grand plot to have him removed from politics that stretched back to the early 1990s.

He employed a scattergun approach to outing those behind the conspiracy when testifying at the Commission of Inquiry into State Capture, Corruption and Fraud in the Public Sector in Johannesburg on Monday, and at times appeared fidgety and nervous.

His performance contrasted starkly with the demeanour he displayed in a video he released on Twitter on Sunday afternoon, just hours before he was due to appear at the inquiry.

In that clip he is shown very much at ease with what is to come, laughing and mocking his critics while singing: “Zuma must fall! Zuma must fall!”, a slogan used in the past by protesters demanding he step down.

Zuma maintained that among the conspirators who tried to end his career over three decades were spies from local and international security agencies, senior members of the ruling African National Congress, and white billionaire businessmen from South Africa.

However, when he deviated from using this broad, opaque storyline and started to name individual conspirators, his version of events began running into credibility trouble.

For instance, at one stage Zuma said he had known for years that former minister Ngoako Ramatlhodi, who accused him of corruption at the inquiry last year, was an apartheid-era spy recruited as a student in the 1980s, and that he was part of the conspiracy against him.

Yet that raises the question, why did Zuma remain silent on this for decades and appoint Ramatlhodi, an ANC colleague, to his cabinet on three occasions between 2010 and 2017?

Ramatlhodi has since denied the allegation and offered to take a lie detector test to prove his innocence, reportedly saying Zuma had labelled him a spy because he was “angry with me for telling the truth” when giving his evidence at the inquiry.

Indeed, Zuma’s opening testimony appeared designed to deflect attention from the allegations that he enabled private sector actors to loot the state in return for a cut of the proceeds, rather than to tackle the individual accusations head on.

Most Americans disapprove of Trump’s response to protests, says poll 00:20
Thousands gather to remember George Floyd in Houston hometown 00:19
MPs will no longer be able to vote without being present at Westminster 21:55
Yemen funds for humanitarian aid fall far short of sum needed 20:00
Black and Asian people in England 50% more likely to die from Covid-19 – report 19:07