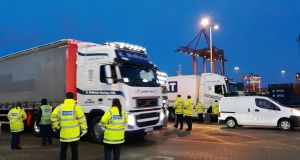 ‘Unfortunately, some [businesses] will react by postponing any preparations.’ Photograph: Revenue

Businesses will be reluctant to recruit staff for Brexit because of the uncertainty around the timing of the UK’s departure despite last week’s six-month extension, an industry group says.

Traders are unlikely to hire new employees to handle post-Brexit customs procedures until they know when the UK will leave, says Tom Thornton, Brexit spokesman for the Irish International Freight Association.

Mr Thornton, who represents companies that provide freight and customs clearance services to clients, still welcomed the decision by the EU and UK to extend the Brexit process until October 31st.

Companies had feared that the UK would leave in a disorderly exit without an agreement as scheduled last week, casting doubt over the capacity of traders to cope with the sudden introduction of new Border inspections and customs checks.

“We are pleased that an extension has been agreed. The extra time will allow companies to continue with their preparations,” said Mr Thornton.

However, he said the political uncertainty around the actual departure date, with the possibility that it may happen in June, was still causing frustration for businesses.

“Unfortunately, some will react by postponing any preparations,” he said.

The possibility of the UK still agreeing to the proposed divorce deal would discourage companies from spending money to hire new staff to handle post-Brexit customs procedures for UK trade because the deal includes a standstill transition period until the end of 2020 and possibly up to the end of 2021.

“It is difficult still to see how our members would risk recruitment of staff within the next few months without a clear view of the actual departure date,” said Mr Thornton.

“What will continue to happen is that our members will train current staff so that they will have some resources available in the event of a sudden departure.”

Companies are being encouraged to set up specific systems and facilities around customs procedures to be able to perform them at their warehouses and away from the ports, except for goods requiring controls.

The extension of the UK’s Brexit deadline until the end of October means that the team of Irish officials overseeing the process will lose some key members.

Rory Montgomery, head of the EU division at the Department of Foreign Affairs, is due to retire this summer. Mr Montgomery, a former Irish ambassador in Brussels and Paris, has been a key figure in the Brexit team at Iveagh House, working closely with the ambassador in Brussels, Declan Kelleher, and in London, Adrian O’Neill, and reporting to Minister for Foreign Affairs Simon Coveney.

Ronan Gargan, the director of the EU-UK unit within the department’s EU division, is leaving Dublin to take up the role of ambassador to Hungary in Budapest. He has worked on managing the complex technical issues raised by the UK’s departure from the EU single market and customs union and what it means for cross-Border trade on the island of Ireland and east-west trade between Ireland and the UK.

Their departures will follow the retirement of the department’s political director, Barrie Robinson, last week.