Brexit will stay mired in fantasy until economic reality is acknowledged 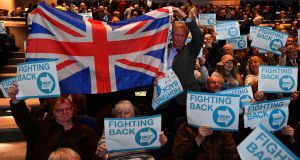 Supporters of the Brexit Party at the first public rally of their European Parliament election campaign, in Birmingham on Saturday. Photograph: Daniel Leal-Olivas/AFP/Getty Images

Hammersmith Bridge, an important Thames crossing, was abruptly closed in the past week for safety reasons. The inconvenience and costs to Londoners have already been considerable. Thousands of buses have been diverted and many businesses are up in arms about disrupted trade. The local authority responsible calculates that £40 million (€46 million) of repairs are necessary. The closure is likely to be ‘indefinite’ because the money isn’t there. Government, whether of the local or central variety, claims to be unable to find the necessary cash.

A few hours after the bridge closure, another shutdown occurred. Operation Yellowhammer was stood down by the UK government. The code name given to the UK’s preparations for a no-deal Brexit was, apparently, chosen at random – a bit like the original ‘no deal is better than a bad deal’ soundbite repeated ad nauseam by Theresa May. Nobody of any consequence ever thought those words were true. They were an attempt to gain negotiating leverage but were always seen for the bluff and bluster that they were. If you threaten the other side of the table it is of obvious importance to be credible: no deal was always incredible so was never taken seriously.

Brexit planning has so far cost the UK government £4 billion. Much is made of this figure because it represents hard cash actually spent. These are direct costs. But it’s the invisible damage that is much bigger – and gets far less attention. Goldman Sachs, for example, estimates that Brexit has resulted in £600 million of lost GDP per week since the referendum.

My own calculations suggest that the implied loss of £85 billion to the economy maps to £28 billion of tax revenue gone missing. So far. That £4 billion in Brexit planning spending makes the headlines but the loss of £28 billion in taxes obviously hurts a lot more.

But does it? One thing Brexit has taught us is that mere finance, the loss of cash and jobs, doesn’t seem to matter. Minds are not changed by appeal to economic reason or logic.

No deal was never a credible threat. Yet that didn’t stop the government devoting half of that £4 billion on a pure fantasy. Spending £2 billion on something that was never a serious possibility might be thought irresponsible or reckless.

So, we could calculate the number of new hospitals, for example, that these billions could have funded. Leading Brexiteer Daniel Hannan once claimed that seven state-of-the-art hospitals could be built for £10 billion. On that kind of arithmetic, I reckon that the UK has 22 hospitals gone missing as a result of Brexit.

Missing tax revenue does not seem to matter, perhaps because it is invisible. But even that extra spending, that hard cash, doesn’t seem to bother too many people. And, of course, the connection between missing billions and a few quid necessary to repair a bridge is one that is less than obvious. But the future of Brexit depends in no small part on how many people can be persuaded to make that connection.

Philip Hammond, the chancellor, says fiscal austerity will come to an end only if parliament passes May’s deal. That’s the deal that has been rejected three times already. It’s another incredible threat. Whatever happens next, whoever is prime minister or chancellor, whatever the Brexit outcome, the government spending taps will be turned on.

Brexit remains mired in fantasy. All possible outcomes, from no deal to revocation, remain possible. The outcome, whatever it is, may have been delayed, but for as long as everyone ignores economic reality, nothing is ruled out. October 31st looks like another cliff edge, with a further delay as likely as a no-deal exit on that date. Also unchanged is the low probability of the British parliament coming to a consensus.

Nothing will change until something or somebody manages to make those connections to economic reality. One or two prominent Brexiteers have recently recanted, mostly because economic logic seems to have finally made an impact. But these high-profile changes of mind have attracted more derision than imitators.

At least one analyst has described the economic consequences of Brexit in terms of a slow puncture: the air is slowly seeping out of the economy. To the tune of £600 million a week. That this hasn’t changed the terms of debate reveals Brexit’s biggest lesson. Once the nationalist genie is out of the bottle, what happens next isn’t driven by economics.

According to opinion polls, close to 30 per cent of the British electorate are limbering up to vote for far right political parties in whatever elections come along next month. What happens next? History is a guide – no more than that, but one worth thinking about. Conflict, of one kind or another, isn’t inevitable, but scarily possible. I fear it is likely.

The ultimate irony, of course, is that Europe exists in its current form precisely to head off these kinds of political dynamics. Until we get back to bridge building, of all kinds, Brexit risks are in serious danger of spinning out of control. ‘Repair that bridge’ should be the mantra of anyone wishing to counter those who would ‘build that wall’.