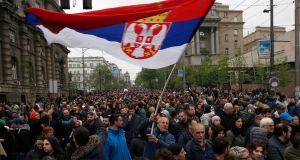 A Serbian flag held aloft during a protest march against President Aleksandar Vucic in Belgrade on Saturday. Photograph: Darko Vojinovic

Thousands of protesters have marched through the capitals of Serbia and Albania to demand the resignation of leaders they accuse of undermining democracy and fostering corruption.

Demonstrators gathered in Belgrade on Saturday to continue a campaign of almost weekly protests. These began after an outspoken critic of Serbian president Aleksandar Vucic was beaten up by unidentified attackers last November.

Though the rallies have been almost entirely peaceful, the populist Mr Vucic has described people taking part as “fascists, hooligans and thieves”, while his allies and pro-government media accused protesters of planning to storm parliament and local administrative buildings around Serbia.

Riot police were stationed in parliament on Saturday. Moreover, members of Mr Vucic’s ruling party reportedly barricaded themselves inside council offices, but no violence occurred.

Protest leaders and opposition party chiefs from across the political spectrum are calling for Mr Vucic’s departure, for free and fair elections and for state media to end their pro-government bias.

However, Mr Vucic has stood firm. He has said he will not bow to demonstrators’ demands even if five million people take to the streets – prompting the protest movement to adopt the name “One in five million”.

Organisers of Saturday’s rally said tens of thousands of people attended. And they accused the government of ordering transport firms to cancel some services to Belgrade so as to keep numbers down.

From a stage outside parliament, Bosko Obradovic, leader of the far-right Dveri party, told protesters they would “not give up until Serbia is free again”.

“We are asking for free media and free elections. [There’s] no turning back until we win!” the Balkan Insight news service quoted him as saying.

The demonstrators gave Mr Vucic a week to meet their demands or face a bigger protest. But he and his allies scoffed at the ultimatum and are planning to hold a big pro-government rally in Belgrade this Friday.

Serbian interior minister Nebojsa Stefanovic claimed only about 7,500 people joined the opposition march and that Mr Vucic had intended to address the crowd but changed his mind when he saw it was so small.

The protesters are also calling for action from the European Union. They accuse the bloc of turning a blind eye to Mr Vucic’s autocratic rule and disregard for democratic norms because it sees him as a stabilising factor in a complex region.

Demonstrators in Albania make the same complaint about Brussels’ attitude towards their prime minister, Edi Rama, who hopes to start accession talks with the EU in June.

Mr Rama’s Socialist-led government faces criticism on a host of issues. These range from corruption to the rising cost of education and from alleged vote buying at 2017 elections to accusations of links between officials and organised crime.

Protesters threw fireworks and other missiles at police outside parliament and government headquarters in Tirana on Saturday and faced volleys of teargas in response. Five police officers and 15 demonstrators were reportedly hurt in the exchanges.