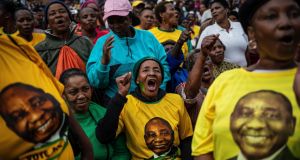 South Africa’s ruling party has internally reviewed its list of candidates for the next government over fears voters will abandon it in May’s crucial election because dozens of its nominees are accused of serious crimes.

Senior African National Congress (ANC) leaders tasked the party’s integrity committee in early April with removing the delinquent candidates in response to voter disgruntlement over its make-up, directing it to review the suitability of everyone on the 200-strong list to serve in parliament.

Recent research polls indicate the ANC should win the May 8th general election. However, in addition to the Western Cape Province, which is expected to remain in the opposition Democratic Alliance party’s hands, the ANC is in danger of losing control of the North West and Gauteng provinces.

Such an outcome would mark the worst electoral performance in the ANC’s history, and would seriously undermine president Cyril Ramaphosa’s authority, leaving him open to being recalled from office at the party’s national general council next year.

Last Tuesday the integrity committee confirmed it had conducted its review, but declined to say if any names had been red flagged-for the party’s national executive committee to act on.

Earlier in the day head of elections Fikile Mbalula insisted that anyone asked to step aside by the committee would be forced to do so, although he gave no indication when this might take place.

However, his utterances run counter to the stance taken by the Independent Electoral Commission of South Africa, which says it is too late for parties to withdraw candidates from the lists submitted to it, as the deadline to do so was March 28th.

The conflicting statements have led some political observers to believe the ANC’s move to clean up its candidates’ list is about creating the perception it is fighting corruption, rather than a genuine attempt to respond to voters’ desire for clean governance.

In short, the ruling party appears to want to kick the divisive issue of tackling corruption within its ranks to touch until after May 8th, so that it does not fan factional infighting in the movement while it is on the campaign trail.

Indeed, the ANC’s candidate list seems to have become the latest battleground in the factional wars playing out in the party between former president Jacob Zuma’s supporters, and those of Ramaphosa.

Many of those recently accused of public sector corruption rose to prominence under Zuma’s leadership, and the make-up of the hierarchical list is seen as the biggest test of strength between the two factions since Ramaphosa won the ANC presidency in December 2017.

Controversial ministers Nomvula Mokonyane, Bathabile Dlamini and former ministers Mosebenzi Zwane and Malusi Gigaba – all Zuma loyalists accused of graft and corruption – have made it onto the parliamentary list compiled by ANC branch structures in the first instance, and then refined by the party at national level.

Mokonyane makes the list’s top 10, as does Zuma’s preferred successor in the ANC, his ex-wife Nkosazana Dlamini-Zuma, which puts them in the running for top government jobs.

None of the politicians on the ANC’s candidate list who have been implicated in South Africa’s ongoing inquiries into public sector corruption have been criminally charged, and they all maintain their innocence. Under the ANC’s rules, only members convicted of a crime are barred from holding public office.

South Africa’s president also has a number of allies in the list’s top 10 nominations. But two of Ramaphosa’s most trusted lieutenants, public enterprises minister Pravin Gordhan and tourism minister Derek Hanekom, appear low down on the list, which suggests his grip on the party is weaker than his supporters had hoped.

According to politics professor Mcebisi Ndletyana of the University of Johannesburg, the list suggests the balance of power in the ANC is currently too tight to call between the Zuma and Ramaphosa factions.

“If the ANC wins the election then things could change in that regard. Ramaphosa will appoint his own cabinet from the ANC’s candidates list and most likely Zuma’s allies won’t make it,” he said.

ANC secretary-general Ace Magashule, Zuma’s highest-ranking ally in the party and a man accused of widespread graft while premier of the Free State province, was responsible for overseeing the compilation of the list.

He has been accused by critics of manipulating the process in favour of Zuma’s backers after it was made public in mid-March, but no hard evidence has emerged to support these claims.

A group of influential ANC elders subsequently warned, however, that an era of party renewal was needed in the post Zuma-era, and they called on the list’s corruption-tainted nominees to stand down for the good of the movement.

“We ask that they introspect and step down . . . to save our movement. We as veterans are saying we are cleansing the organisation,” the group said in a statement in late March.

To date no one on the list who is tainted by corruption has voluntarily stood down.

Richard Calland, associate professor in public law at the University of Cape Town, says the appearance of so many corruption-tainted Zuma allies on the list raises questions around whether Ramaphosa can introduce the “new dawn” he has promised South Africans.

“He is a popular leader with the public, but to give him a mandate to govern means re-electing the ANC, which is seen as deeply corrupt. People appeared willing to take that chance if he cleaned up the party, but the list’s make-up casts doubts over whether he is capable of doing this,” he said.